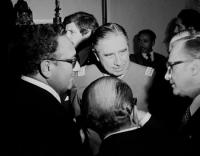 King and KingmakerChile’s Gen Pinochet dies at 91 (BBC) brings the sad, sad news that a true monster no longer walks among us. Naturally, since he’s dead, it’s time to start remembering that “[d]espite his human rights record, many Chileans loved him and said he saved the country from Marxism.” (emphasis added). Despite? That’s all he’s known for! Probably everybody loved him except for the friends and family of the “3,000 people [who] were killed or “disappeared” during his rule which ended in 1990.” Instead make sure to spend paragraphs talking about how “[h]e died surrounded by his family” and that “150 Gen Pinochet supporters had been keeping a vigil outside his hospital since he was taken ill”. Awwww, just a poor little old man fighting for his last breath. A tragic story of human courage in the face of the grinding inevitability of human frailty.

“In June 1973, Gen Pinochet led the armed forces in a dramatic coup against the democratically elected Marxist government of Salvador Allende. (emphasis added)”

It’s just so great that an emotional read of the article gives you the impression that an old man whose long rule of Chile had some faults, it’s true, but earned him a strong following that survives to this day, has died. And who was the one who famously helped him do take over Chile?

Oh, that’s right. Hey, Kissinger! Where’s Pinochet? Why don’t you go look for him? Yeah, I think he went toward the light … that’s right, keep going. Getting warmer? Yup, you must be headed the right way.

As expected, reports from Chile itself aren’t nearly as forgiving of Pinochet as the BBC and other western media are. Crowds Take to Streets to Celebrate Pincohet’s Demise by Jen Ross (Common Dreams) tells the story of “a cacophony of car horns and cheering yesterday”. The only disagreement was over whether to be happy he was dead or mad that he evaded going to trial.

The Washington Post and Pinochet (UggaBugga) writes about this article, A Dictator’s Double Standard (Washington Post), in which the basic attitude toward Pinochet is akin to “At least Hitler introduced the Volkswagen and the autobahn and reduced unemployment”. Although comparing Pinochet to Hitler isn’t fair—Pinochet wasn’t nearly as efficient—neither is the Post’s comparing him favorably to Castro.

All in all, a disgusting showing from the Post, which doesn’t even have the decency to label it as an editorial.

One of the founding mothers of the neocon movement that has made this world such a warm, safe place to live also died recently. Former U.N. envoy Kirkpatrick dies (CNN) has the story, which is naturally chock full of quotes about how sorely she will be missed—by such upstanding community members as Bill Frist, Bill Bennet, John Bolton and the American Enterprise Institute. Somehow they forgot to mention what an ironclad, heartless bitch she was who often competed with Maggie Thatcher in drawn-out contests to see who could squash more of the poor under the heel of her sensible pump.

Seriously, Kissinger. What are you waiting for?