The Stories the Rich Tell Themselves (And that We Believe)

You would think that this article, Down and Out on $250,000 a Year by Karen Hube (Fiscal Times), is an example of Swiftian satire. You would be wrong.

“The bottom line: It’s not exactly easy street for our $250,000-a-year family, especially when it lives in high-tax areas on either coast. Even with an additional $3,000 in investment income, they end up in the red — after taxes, saving for retirement and their children’s education, and a middle-of-the-road cost of living — in seven out of the eight communities in the analysis. The worst: Huntington, N.Y., and Glendale, Calif., followed by Washington, D.C., Bethesda, Md., Alexandria, Va., Naperville, Ill. and Pinecrest, Fla. In Plano, Texas, the couple’s balance sheet would end up positive, but only by $4,963.”

The rest of the article digs into the exact figures even more, but the upshot is: after paying for everything their hearts desire, sending their kids to the best schools, living in the poshest neighborhoods and socking away $75,000 per year in saving, these poor families find themselves in the red. The Fiscal Times charges on to show how the debt they incur is almost wholly due to the overwhelming tax burden placed on them by the high-tax areas in which they are forced to live.

That the fast that attractive areas increase their taxes (because they can) is a true sign of the market at work doesn’t even register for the economics guru who authored this article at the Fiscal Times.

The disconnect evidenced by this line of thinking—these stories that the rich tell themselves about how they are the true victims—isn’t the problem. It’s the fools who are actually barely scraping by but who also believe this crap—which, in their defense, is bugled in one form or another from every major or minor media outlet in a way that would have made even Tass blush—who are the problem.

It’s not like taxes are particularly high in the States; we usually hear about tax rates as they are on the books, not as they are actually paid after all the deductions and flat-out graft have been applied (for example, the corporate tax rate during the Bush years was ostensibly 35%, but corporations paid, on average, less than 2% during his two terms). In most cases, they are massively misreported—either because most financial reporters are simpletons who barely earned their communications degrees or because they are invidious shills of the upper class (or members of it). Take the idea of the marginal tax rate: proposals to increase the marginal income tax for incomes over a certain level will only affect the adjusted gross income over that level, not automatically apply to the entire income. For God’s sake, people! Pay attention.

“The second issue is that earning $250,000 in adjustable gross income is different from earning $250,000 in total income. High-income households tend to take a significant number of deductions. At our request, Roberton Williams at the Tax Policy Center analyzed the total income of households with $240,000 to $260,000 a year in adjusted gross income. On average, they made $315,000 in adjusted gross income, including $32,000 in capital gains and dividends.”

Not that $250,000 per year in income wasn’t unattainable enough for 99.9% of all Americans, but it’s good to know that, when you commiserate with the talking heads in the American media and nod sagely that tax breaks for the rich (or quasi-rich as you’re meant to understand it, because look at how they suffer just as you do in the example above) are the way out of this economic morass, you’re actually agreeing that families that make only $315,000 per year deserve a break too. Or, actually, deserve a break first … because your break has been delayed again. When you get your $400 tax break next year, know that your next-door neighbor—who makes $1 million per year—will be smiling about his $100,000 tax break. Know also that his beneficence will shower that tax break into the local economy, which will, through some twisted path, find its way into an extra quarter tip on the last meal you have to serve on your swing shift at the diner. So there’s that.

And then there are the people who really are living on the edge of destitution, eviction and being frozen out of society (in the colder states, quite literally); the article Chart of the day: The working poor by Felix Salmon (Reuters) has this to say:

“Nearly 1 in 3 working families in the United States, despite their hard work, are struggling to meet basic needs. The plight of these families now challenges a fundamental assumption that in america, work pays. […] The workers in these families have a much greater risk of becoming unemployed than the population as a whole, and of course they’re financially much less prepared for any period of unemployment than most of the rest of us.”

The chart below shows the 200% of poverty level income for various family sizes. The census reports that 30% of the working families in America are at or below this line. More proof of the lopsided distribution of wealth and prosperity in an increasingly expensive society. 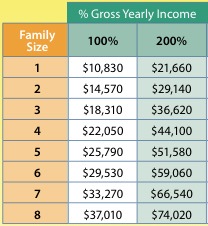