How to browse pictures and albums on earthli

Update 30.11.2019: All of the picture-browsing still applies as described below. In additional, there is a mobile mode available.

I’m going to use a recent example for the screenshots below. The orange text and arrows in the screenshots are instructions. Click any of the pictures to see a bigger version.

I published two journals describing the two big days that I had in the mountains:

You should see something like the screenshot below in the second window: 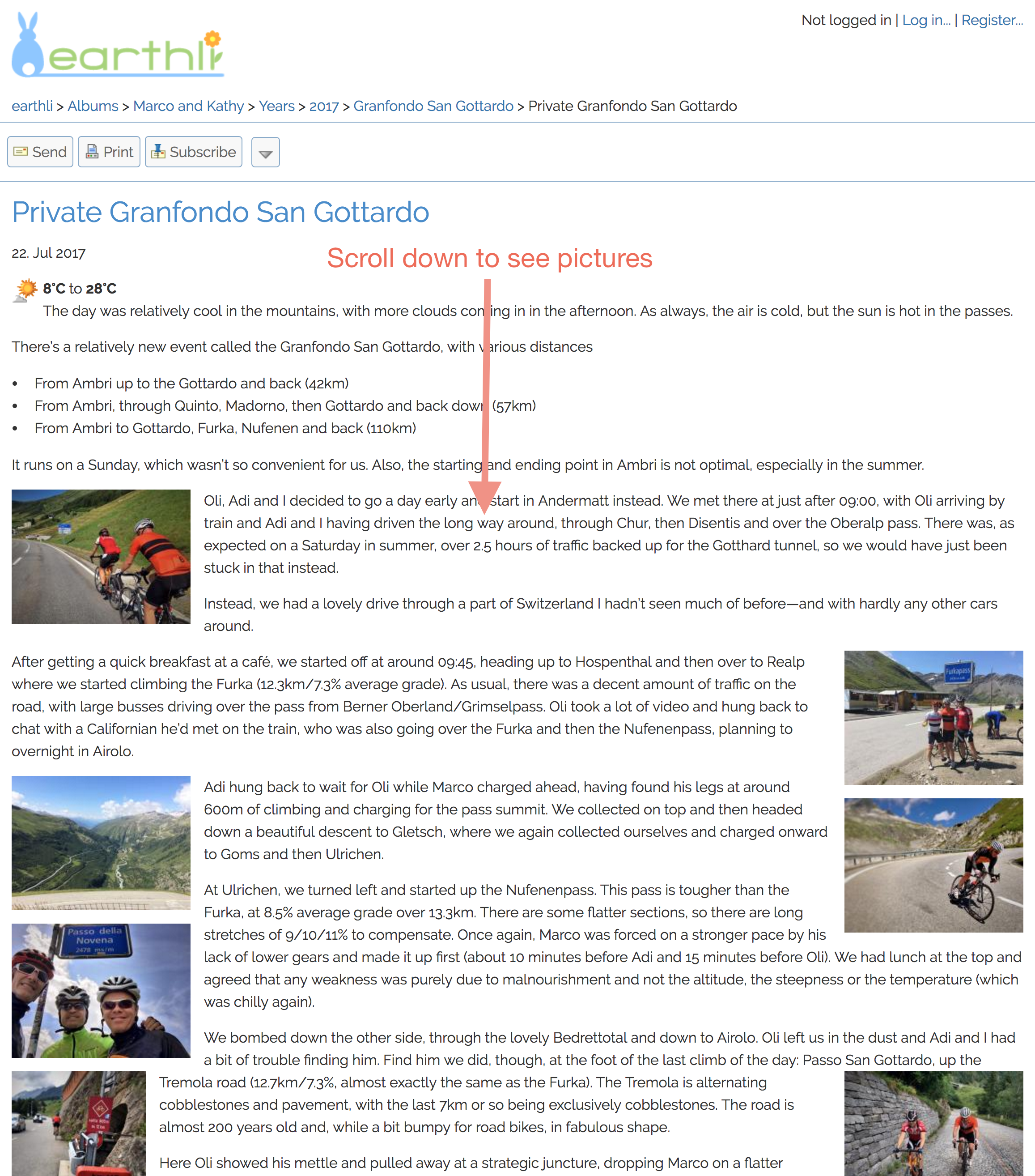 You can read the journal and see a few small pictures. To see more pictures, do as the screenshot says and scroll down. Now you should see the following: 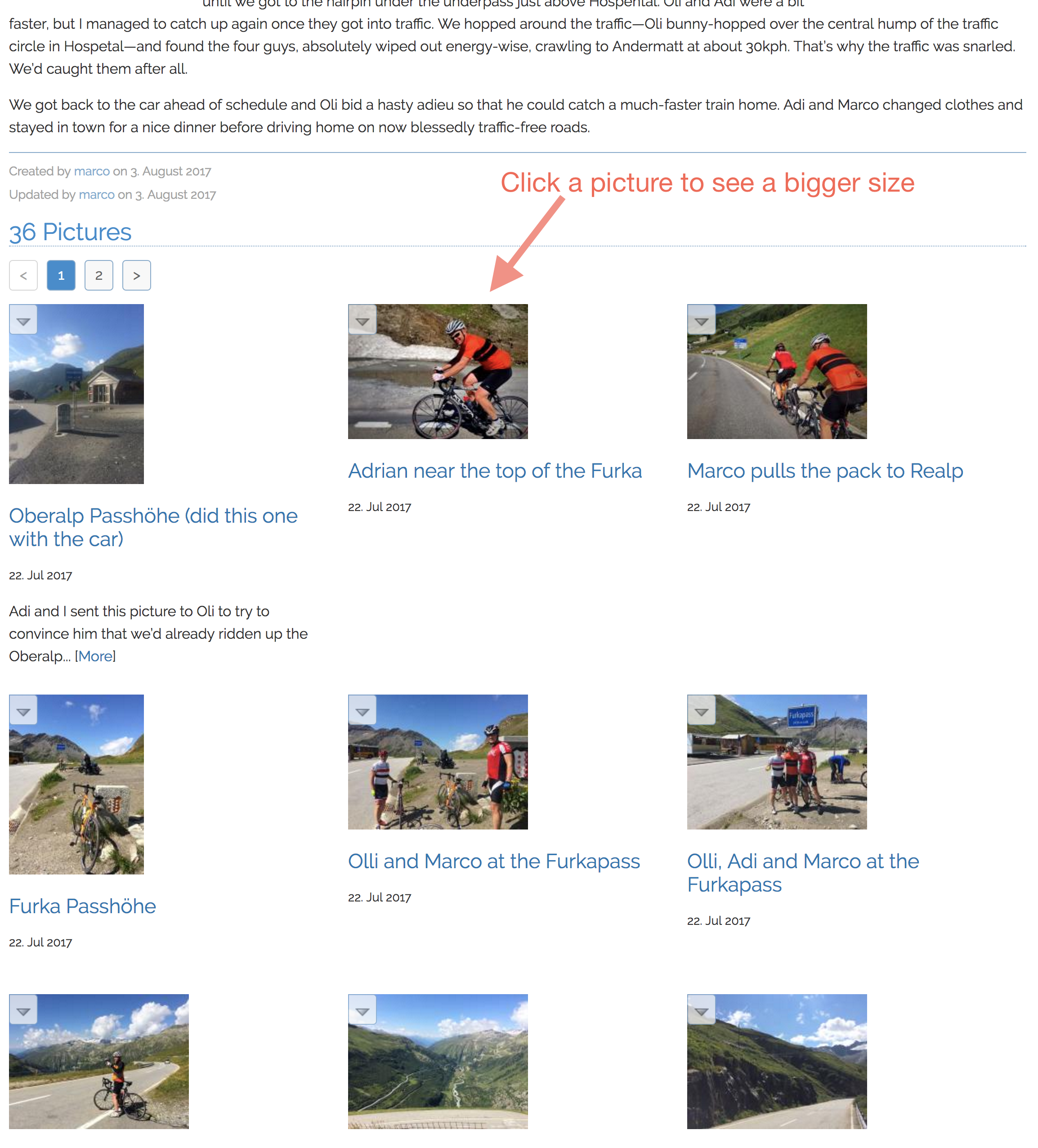 You can see the so-called thumbnails for several pictures, but to see bigger versions, you have to click one of them. Once you have, you should see something like the image below. 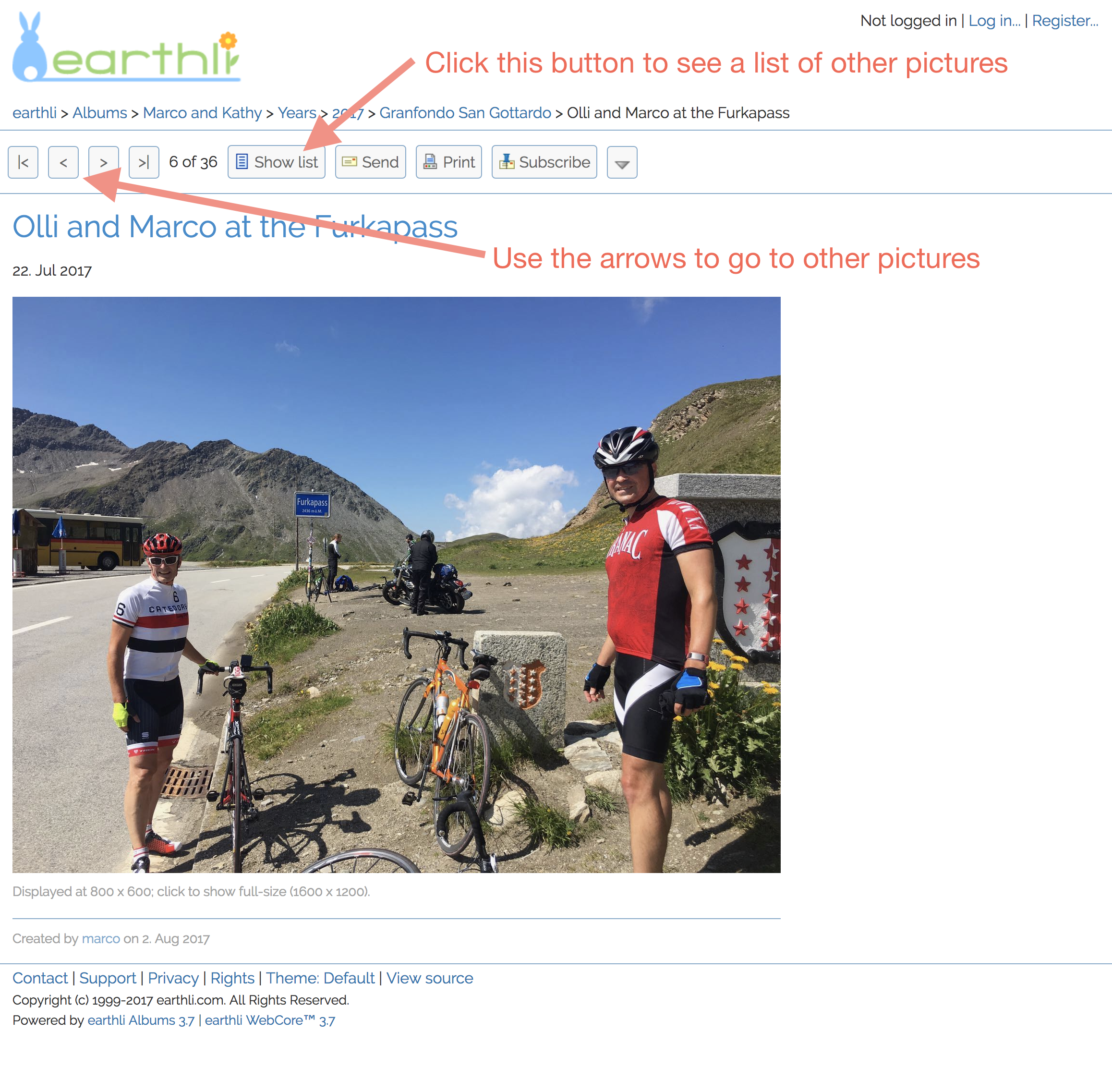 From here, you can navigate the other pictures you saw in the grid on the previous page by clicking the left and right arrows to go to the previous and next pictures, respectively.

You can also show more context by clicking “Show list”. Do that now to see something like the image below. 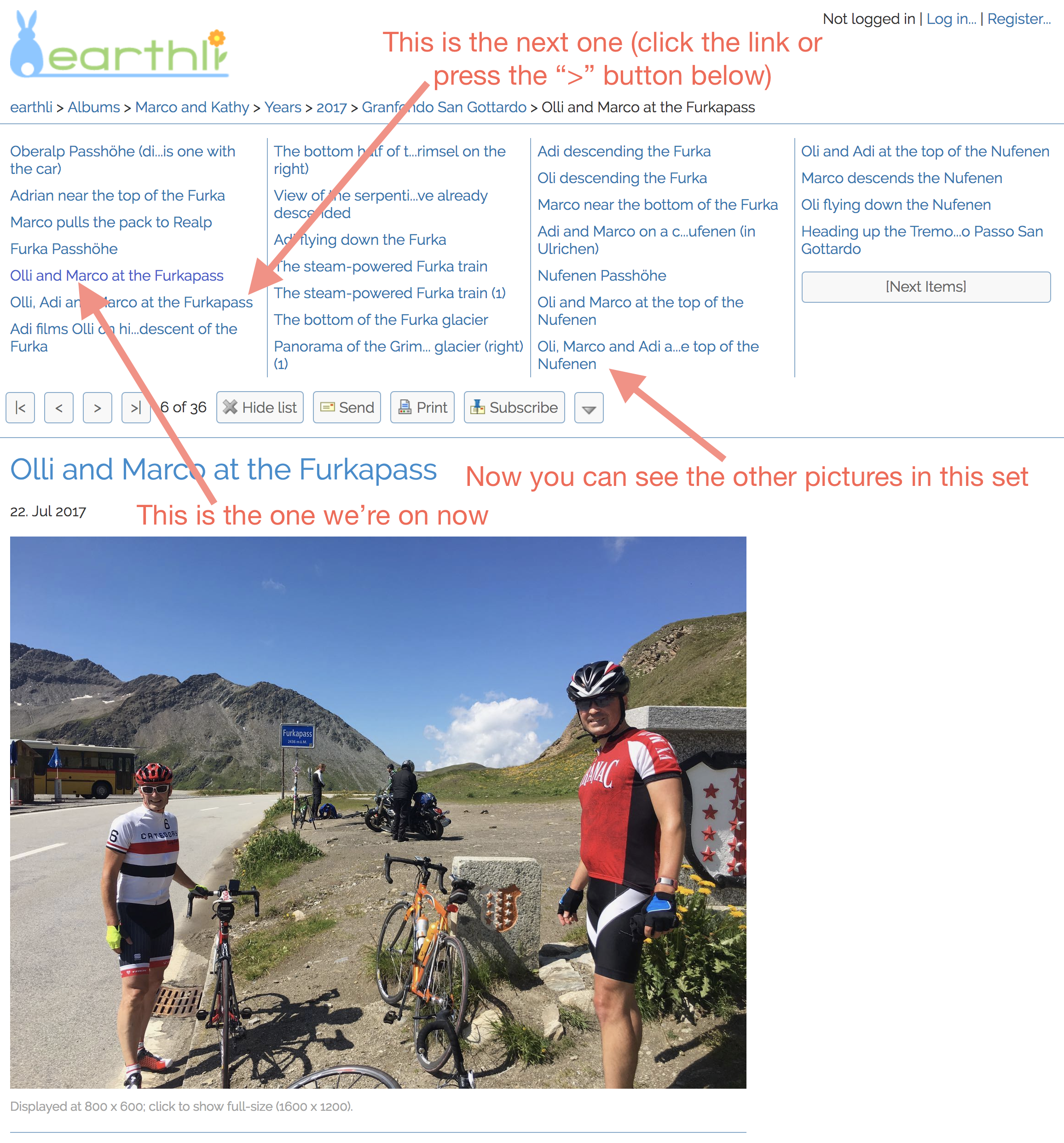 The list at the top shows the other pictures in this set. You can click the links directly to jump around to pictures that sound interesting (instead of just advancing from one to the next).

Next we’re going to take a look at how to navigate on earthli. The image below shows some detail on the navigation menu. The navigation menu is at the top of the page and shows that you are looking at a single picture called “Olli and Marco at the Furkapass” in the “Granfondo San Gottardo” album in the year “2017” for “Marco and Kathy”. 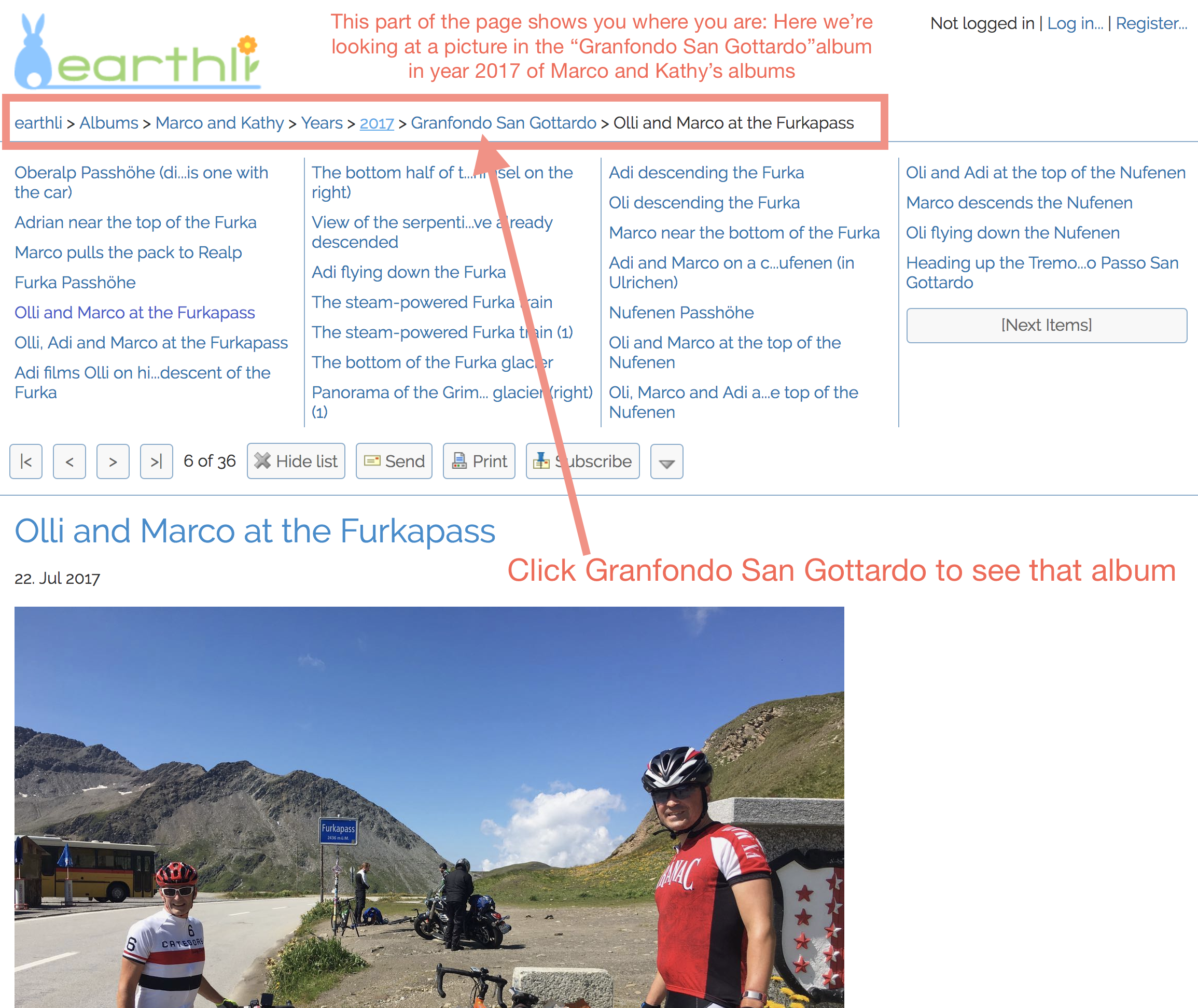 Click the “Granfondo San Gottardo” link to see the image below. 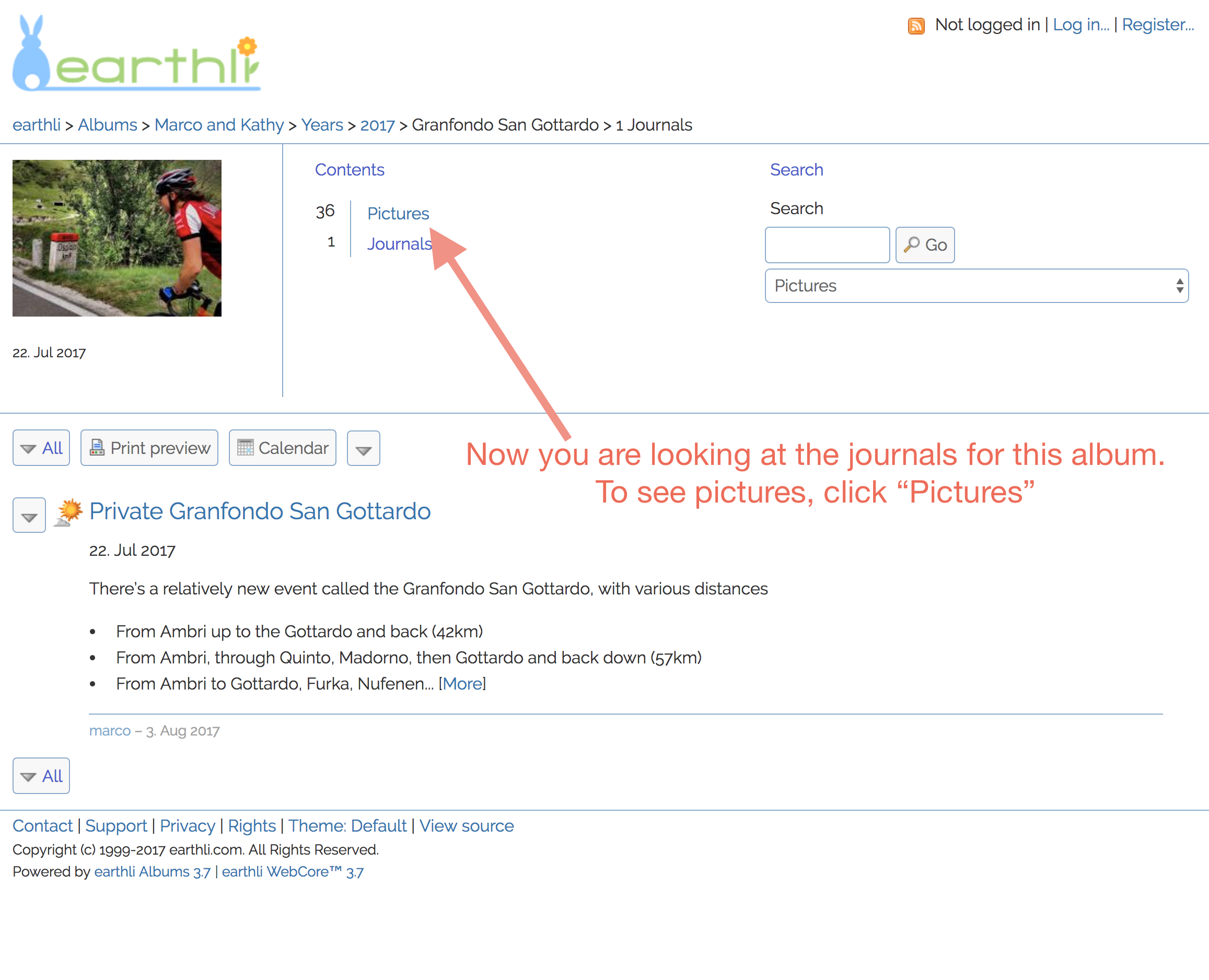 We’re now looking at the list of journals for the “Granfondo San Gottardo” album. This is because we started off looking at a journal (way back at the beginning of this guide). We’re interested in pictures, though, so click the “Pictures” link to see the image below. 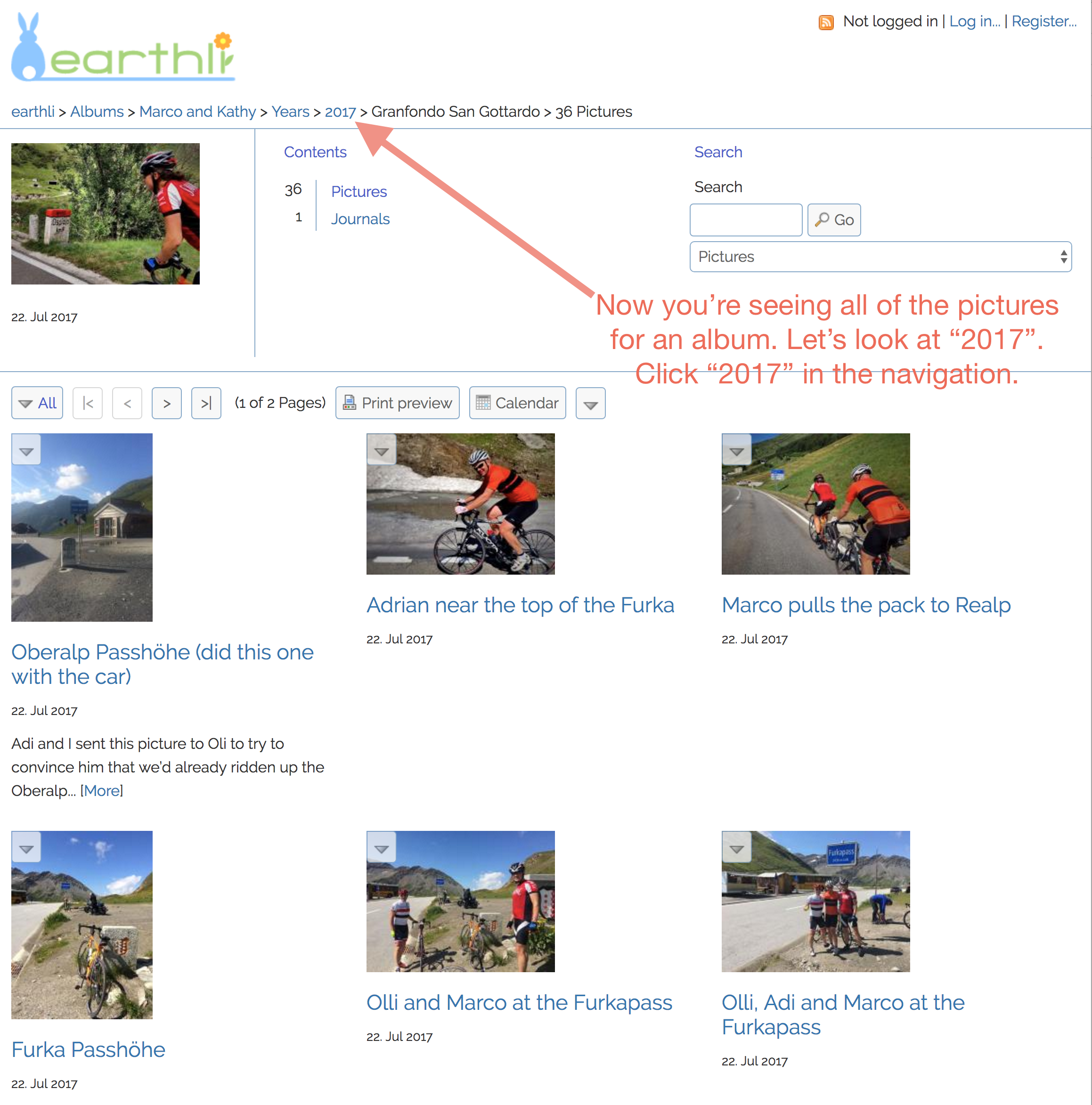 Now you can see all of the pictures in this album (rather than just the pictures for a single journal/day). If you click a picture, you’ll jump right back in to looking at pictures and can use the navigator, as described above. 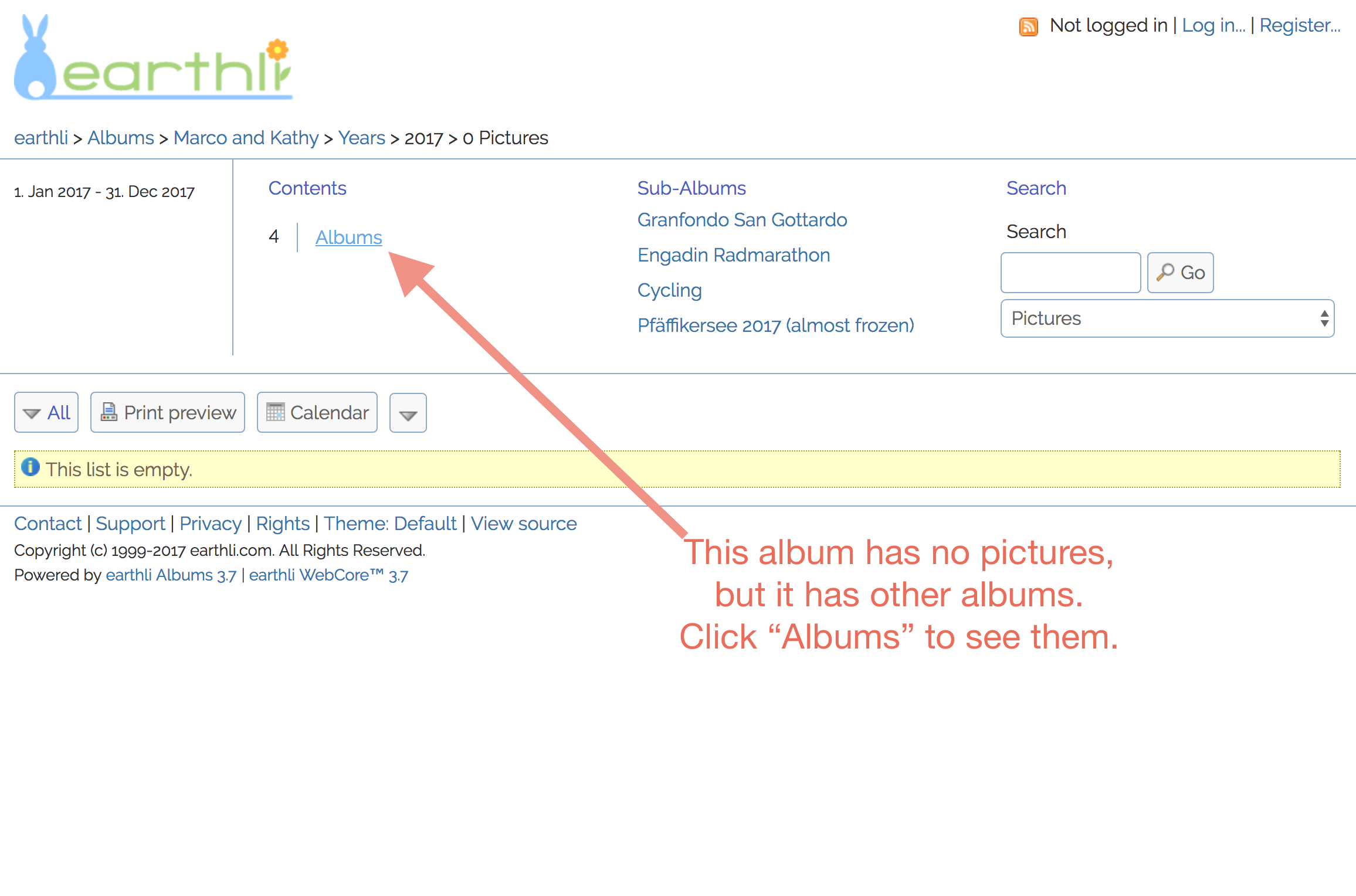 Now that’s odd, isn’t it? You can’t see any pictures. That’s because the “2017” album doesn’t contain any pictures of its own. You can see near the bottom that earthli says “This list is empty”.

This is the same thing that happened when we were looking at journals instead of pictures. Now we’re looking at pictures instead of albums. Click the “Albums” link to show albums instead. You should see the image below. 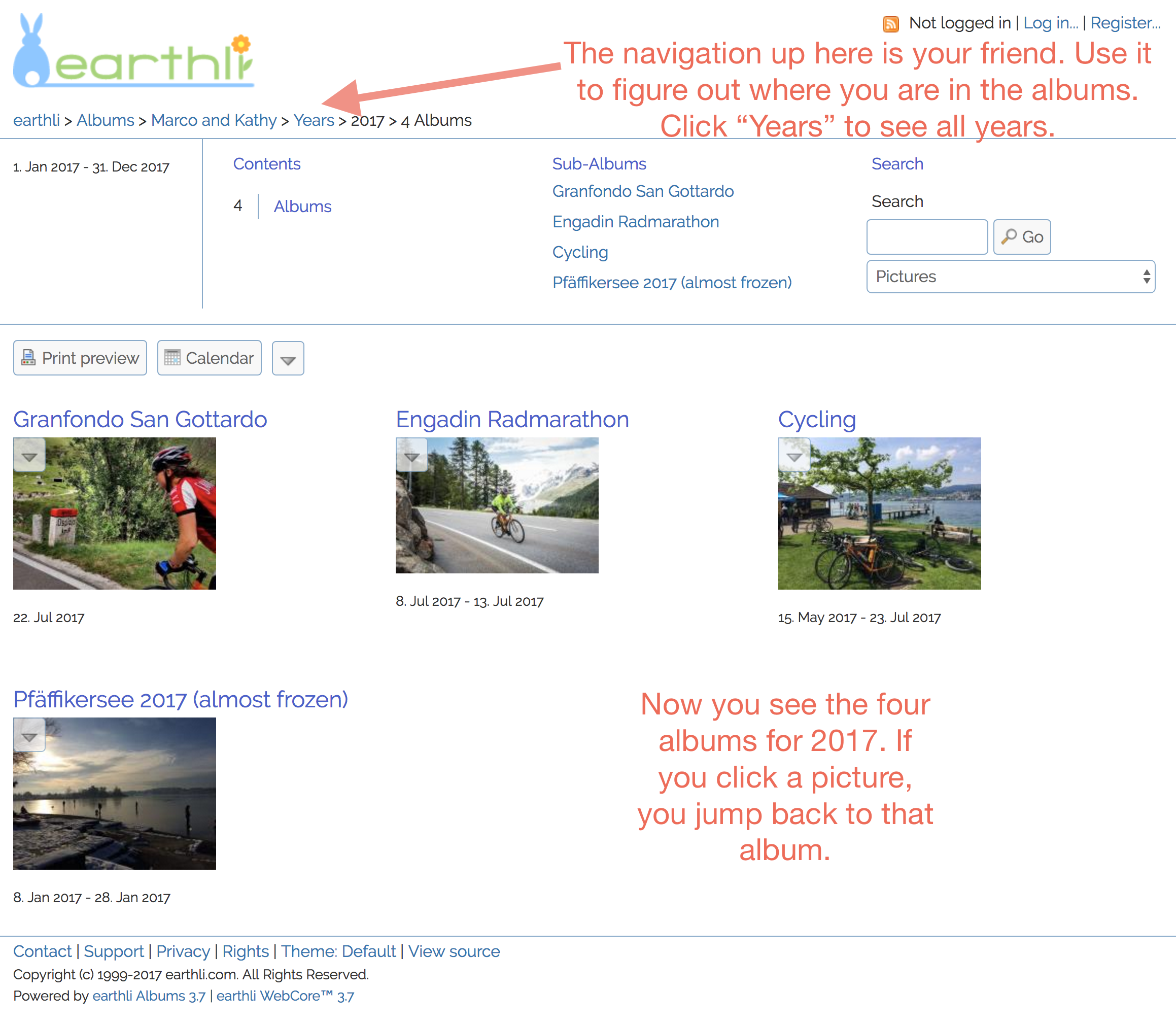 From here, you see that I’ve published four albums so far this year. If you click a picture, you’ll jump back to that album. Instead, let’s follow the instructions and click “Years” in the navigation menu to see the image below. 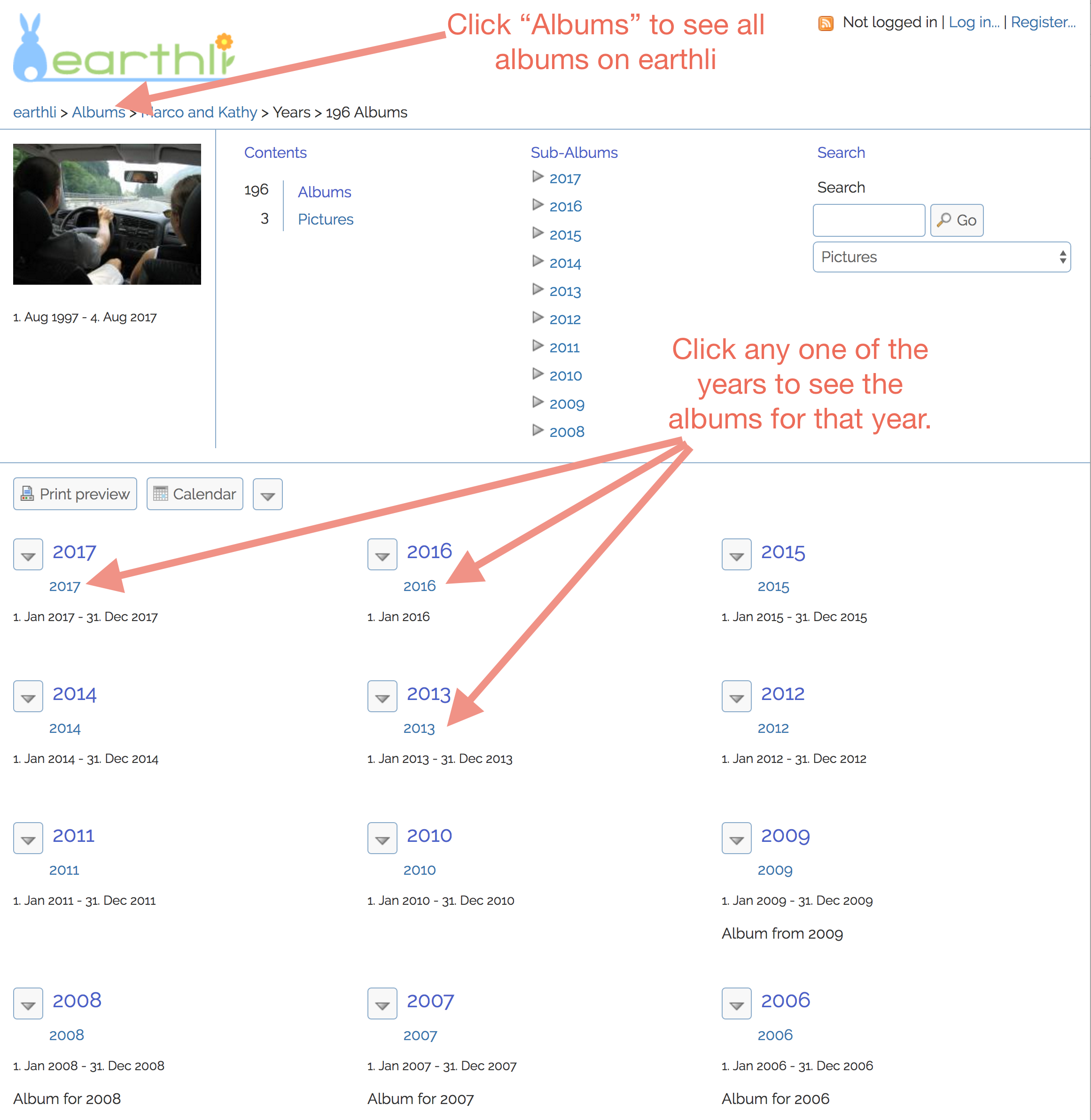 As before with the albums for 2017, you can now jump to another year by clicking the year (as shown in the screenshot). However, let’s navigate a bit farther by clicking “Albums” as instructed to see the image below. 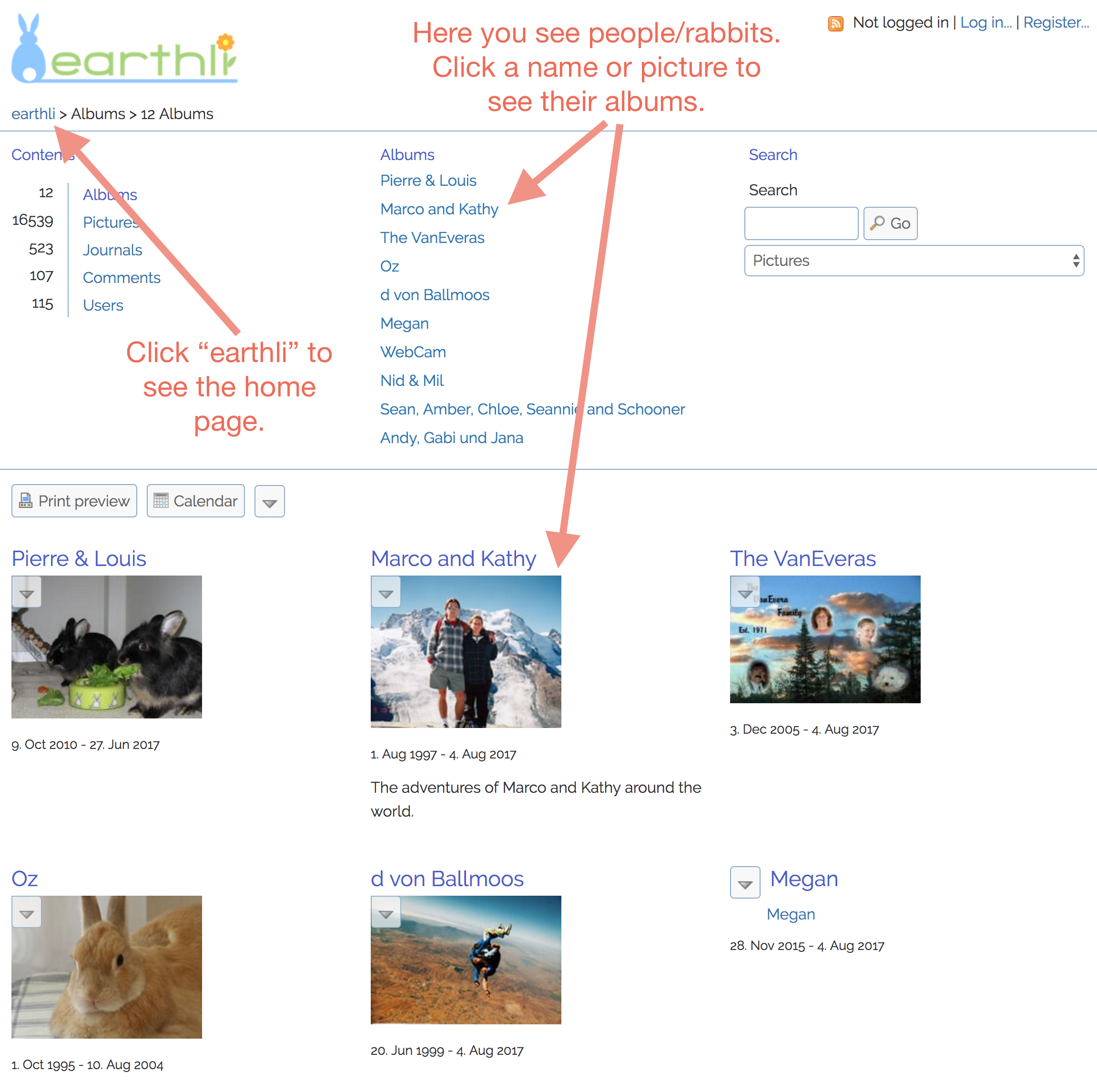 Now you should be getting an idea of how the albums are structured: there are people (or rabbits) at the very top of the hierarchy and each person (or rabbit) has a bunch of albums, organized into a structure. In the screenshot above, you can see “Pierre & Louis” as well as “Marco and Kathy” and even “d von Ballmoos” (although she hasn’t published pictures in a long time). Clicking any one of them will navigate to their albums where you can use what you learned above to get around.

Instead, let’s jump out just one more level by clicking “earthli”, as instructed, to show the image below. 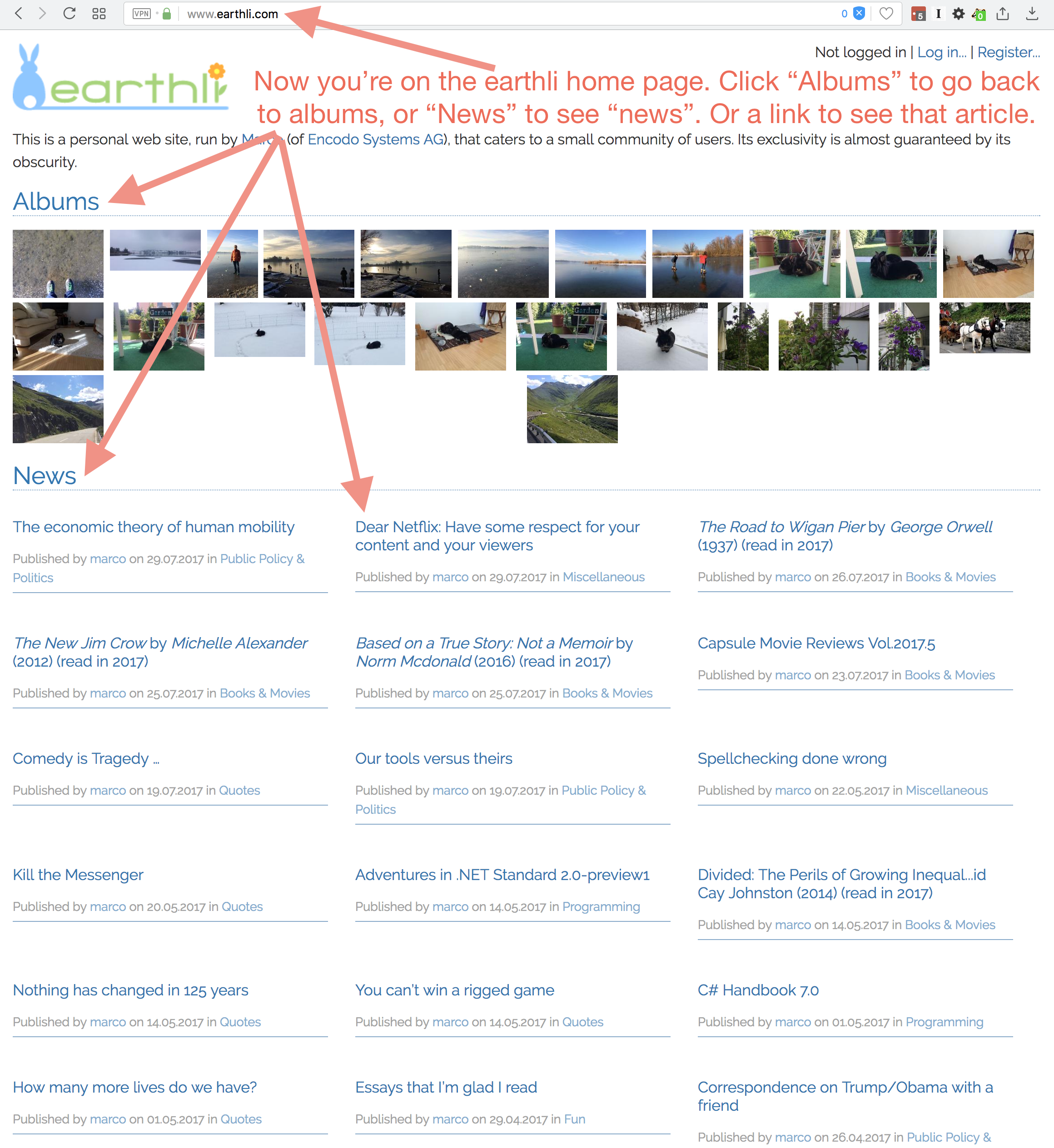 As the screenshot notes, you’re now on the earthli home page—the same place you get to when you type “earthli.com” or “www.earthli.com” in the browser directly. From here, you can click “Albums” to get back to the page you were at before. Or, you can click “News” to go to the main news page where I publish my articles. The “News” page functions exactly the same as the Albums (described above).

For convenience, you can also see the most recent pictures and most recent articles right on the home page. You can click those links as well to jump right to the picture or article. From there, you can use the navigation skills you learned above to get to other pictures, albums or articles.