People put so much stock in the records and trophies and numbers available on Strava, but it just seems so unreliable.

For example, I’d done a long ride a couple of weeks ago: about 140km with 2350m of climbing in just under six hours. Strava “estimated” my average wattage at about 144w.[1] A buddy of mine saw this and went out for one of his own a couple of days later, putting up about 150km with 2350m in about 6:15. My buddy went faster and farther, weighs at least 6-8 kilos more than me and Strava still “estimated” his average wattage at 131w.

I thought this was wrong enough that I scrolled through the segments on his ride, which looked mostly normal (I honestly haven’t tried to figure out how Strava averages the estimated watts), until I came across this segment:

I’ve seen segments before where Strava has literally no problem with a 1km segment marked at 11% average incline but that I’ve managed at a cool 30km/h—about 3x faster than I would be able to climb something like that, Strava chirpily informs me that I put up 2900+ VAM[2] at I don’t even remember how many hundreds of watts. This feat is flatly impossible for almost any rider, but the segment somehow spends years in Strava’s database without being flagged.[3]

Still, this is the first time I’ve seen Strava estimate 805w on a descent, which my friend managed with absolute aplomb at a cool and calm 106bpm heart-rate.[4] Not bad for an old guy. :-)

[1] For those not used to descents: you generally don’t generate a lot of watts going downhill, even with watt pedals. If you don’t measure watts and Strava is estimating for you, then you gets almost nothing for descents. If you leave and return to home, then you’ve descended as much as you’ve climbed, so your average for the ride is going to be considerably lower than your FTP.↩
[2] VAM = Vertical Ascent in Meters↩
[3] There is no mechanism that I’ve been able to find where I can flag a segment as nonsensical—just whole rides.↩
[4] Now that I look even more closely, I see that did a short 6% climb right after that, which he only managed at 7.9km/h (ludicrous), expending only 17w, but with a 150bpm heart-rate. A later one “Mülligerstrasse” is also suspect: the speed on a 5% is more likely to be right, but he only pushed 49w on that climb? Really Strava? These watt numbers are useless.↩

Ragenbuech is not a real segment

The following segment shows that Strava is technically correct when it says that this was the second-fastest time (it considers a more recent tie to be inferior, which is fine, I guess), but it’s positively convinced that my PR is still 33s, although it hasn’t been that since March of last year. How long is this data cached? 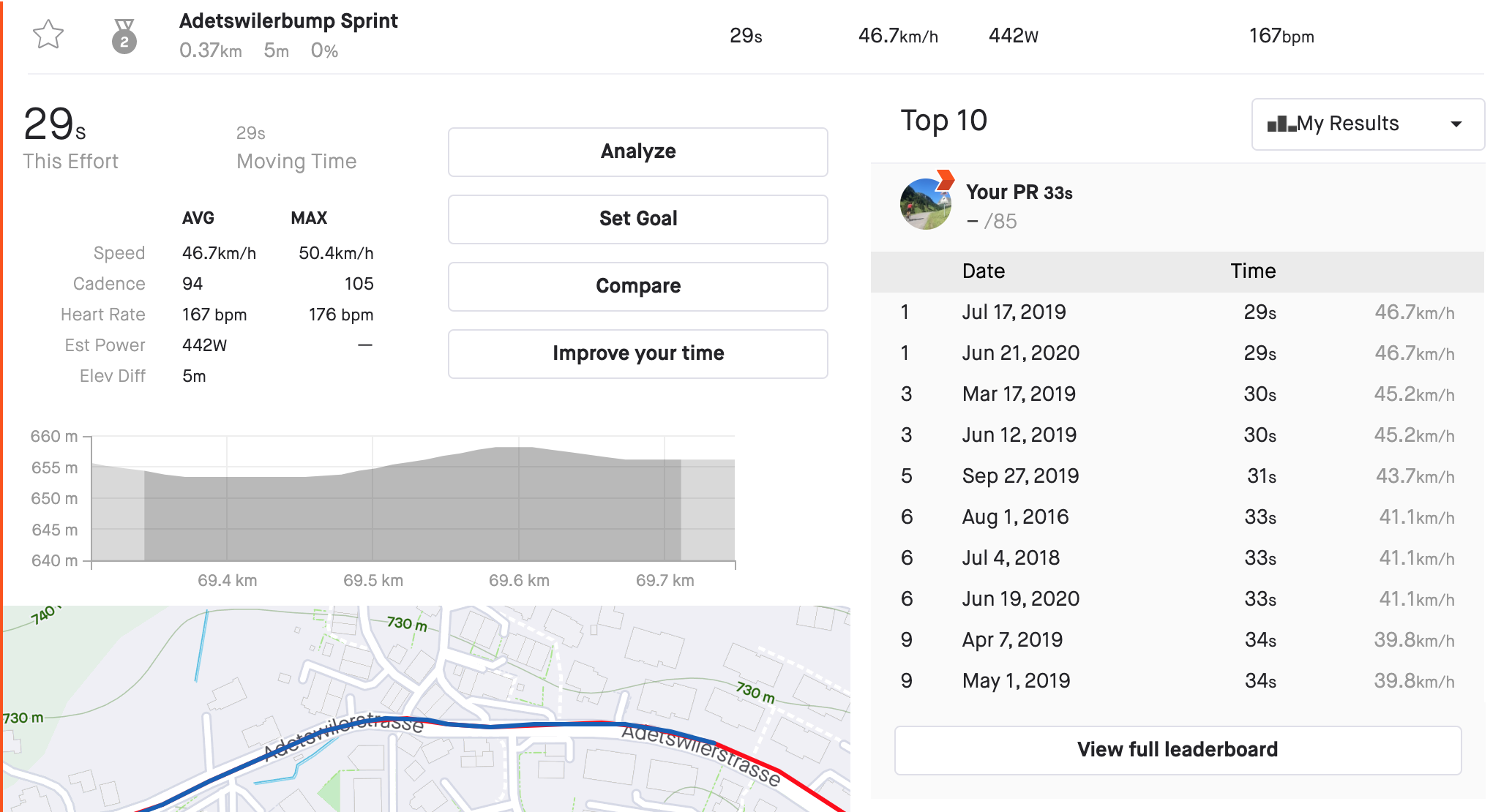 I recently bombed a local descent right near my house and thought I’d done quite well. Strava told me I’d gotten my third-best time, which is correct by their calculations, as I’d tied my second-best time, as shown below. 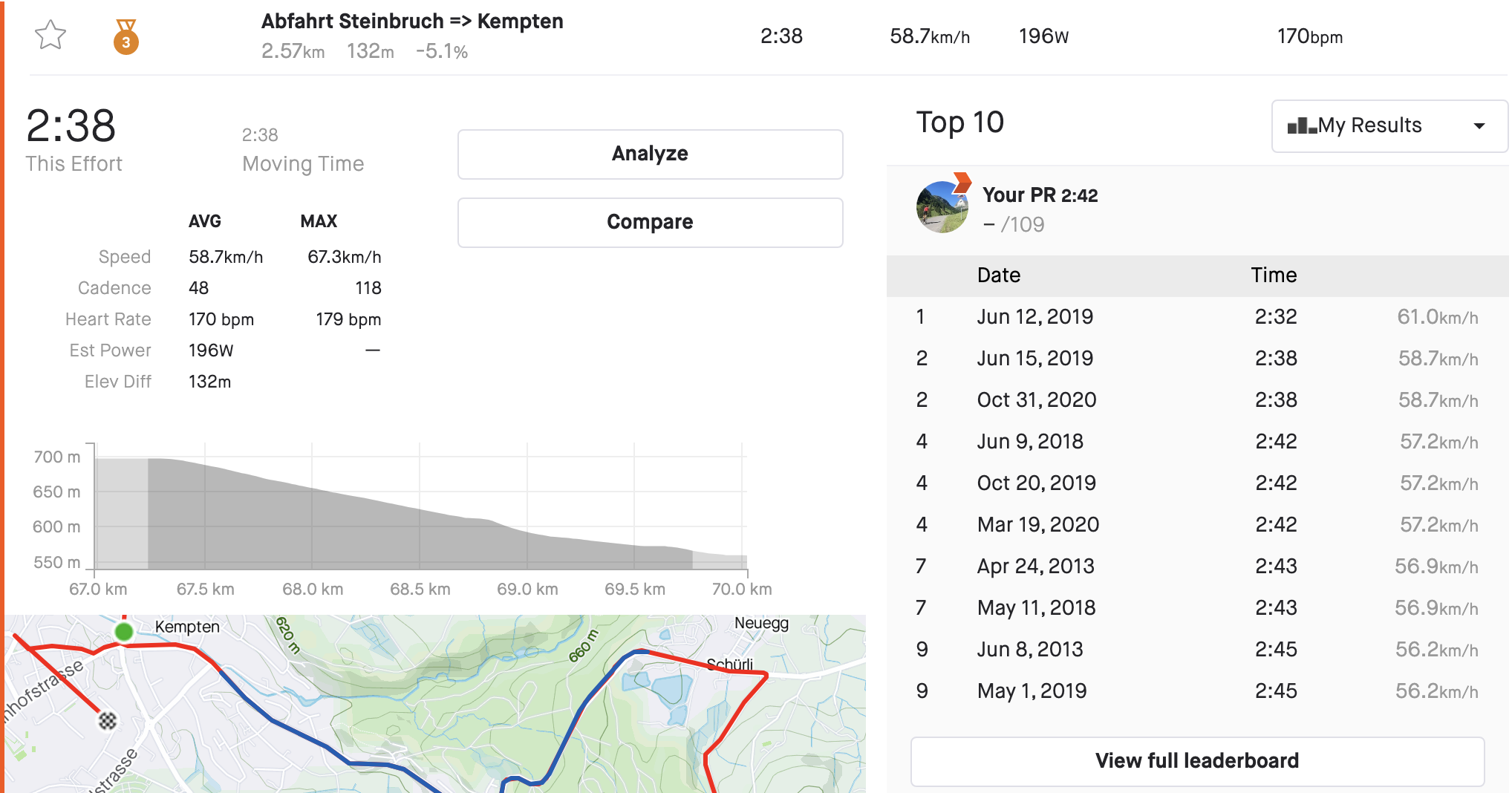 However, if I switch to the “I’m Following” list, I see my PR as the fourth-best time in the list, a full 10 seconds slower than my real PR. 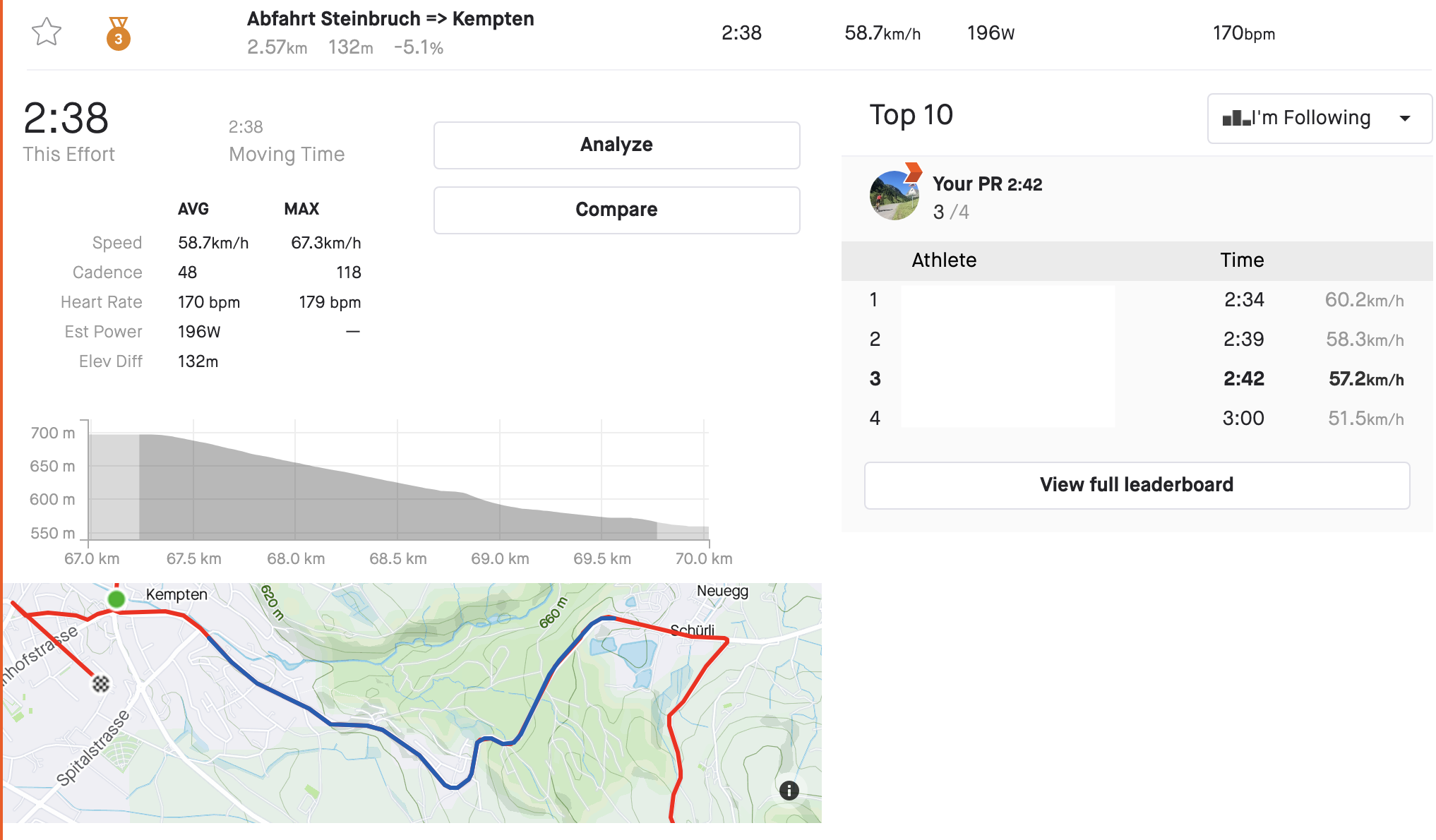 On the left-hand side, Strava is showing my time for the current ride, which is four seconds faster than the PR it’s showing on the right-hand side.

I just see these things because I’m an engineer and am sensitive to odd numbers (which usually indicate a bug in software I’ve written). It may be that Strava’s confused because I only show numbers to users that follow me (rather than to all users) and maybe their caching is not optimized for this situation. This happens a lot, though.