Jimmy Dore on tightening of the “liberal” censorship noose

This is excellent coverage of CNN literally saying that Congress should force tech companies to shut down their competition because “there are YouTubers with a larger audience than daytime CNN” and that cannot stand.

He starts with old footage of Noam Chomsky teaching his students that standing up for freedom of speech means nothing if you’re only willing to defend speech with which you agree. If you’re for censorship of opposing views, then you’re not for freedom of speech—in any way.

They completely miss that they are the biggest propaganda of all.

Of course, CNN claims to be targeting right-wing channels, but they know what they’re doing. They’re taking advantage of the wave of “liberal” support for extreme China-level censorship to have the government eliminate the competition. They don’t care how it happens. They don’t care about left or right—they just want everyone else to shut up and get away from the money pie.

The left is absolutely justified in being worried. This is a bad idea.

They basically argue for de-platforming by making alternative sources something that people can seek out if they want them—they will never find them and everyone knows it—but not “pushing it into their faces”. That’s reserved for official state propaganda like CNN, which is on “in every airport, every bar, everywhere—and pushing war, always pushing war.”

Now the whole cabal is ramping back up, once again, against Russia, and have selected China as an enemy, to boot. They’ll grab Iran on the way and make sure that Afghanistan stays viable as a cash cow for news.

“Dore: We shouldn’t push stuff into people’s faces, except we only want people to consume the drivel that we pass off as news.”

They want to make it impossible for people to get certain news, certain sources on their phones—or at all. News should be suppressed or, in the words of the CNN shill: “we have to turn down the ability of these right-wing influencers to reach these huge audiences.” Obviously, this does not affect CNN, one of the biggest right-wing influencers of them all. Also, don’t worry about hyper-consumerist influencers. No-one ever complained about them, either.

I honestly welcome the world after Trump, with media tools like CNN and MSNBC and NYT still trying to fight that fucking Balrog so hard that they don’t even understand that they’re plummeting into the pit with it. Fuck them all. None of their arguments are worth considering any farther. They’re garbage.

I welcome it because these idiots seem poised to finish the job that Trump started: the decline and fall of the American Empire.

Dore goes on to cite Greenwald (who was citing Taibbi, who was citing a survey from last fall) that CNN (79%), NPR (87%), NYT (91%), and MSNBC (95%) are more siloed than all but Fox News. All of these “mainstream” and self-professedly legitimate sources have 79-95% self-identified Democrats as listeners/viewers. Madness.

“This idea that just right-wingers are siloed off is complete garbage. CNN is a silo. MSNBC is a silo. NPR is a silo.

“And, by the way, why wouldn’t [CNN] bring on someone who has a counter-narrative to that? Why wouldn’t they have a healthy debate about censorship? Why not bring on Noam Chomsky or Glenn Greenwald or Chris Hedges or Matt Taibbi or Aaron Maté? Why not bring on someone like that? Some award-winning journalists who disagree with the establishment-approved narrative. That’s why you’ve gotta have free speech because they’ll never give you a [spot]”

They never do this because (A) they’re not interested in alternate opinions and (B) they would try to force the guests to only espouse the views that CNN already approves of.

“Note how this CNN imperial stenographer fearmongers about foreign bogeymen with his “foe” rhetoric. The real foe of average working-class Americans isn’t any foreign nation; it’s the parasitic capitalist oligarchs who control everything and their lackeys in politics and the media”

Dore references Greenwald above, who was interviewed recently in ’Journalists Are Authoritarians’ by Nick Gillespie (Reason).

“Glenn Greenwald: Trump gets in, and The Washington Post changes its motto to “Democracy Dies in Darkness,” essentially saying press freedom is under assault. [White House reporter] Jim Acosta writes a bestseller with some pompous, self-glorifying title, like Danger: Reporting in the Era of Trump. What the fuck ever happened to Jim Acosta that constitutes an assault on press freedom? The worst thing Trump ever did to any of them was to say mean things about them in tweets. Those aren’t assaults on press freedom. I was threatened by the Obama administration with prison when I was doing the Snowden reporting. I was criminally indicted by the [Jair] Bolsonaro government at the beginning of [2020] for the reporting I did in Brazil. Those are attacks on press freedom. Saying Jim Acosta is an idiot, and tweeting something insulting about Wolf Blitzer, isn’t.”

“So you go through those metrics. George Bush and Dick Cheney started new wars in Iraq and Afghanistan. Obama started new wars in Libya and Yemen. What new wars did Donald Trump start? He escalated bombing campaigns, which he inherited, in a pretty grotesque way. But he didn’t start any new wars.

“When you look at things like the destruction of Iraq or the implementation of a torture regime—what has Donald Trump done that even remotely compares in terms of moral evil to any of that? Nothing. And yet we’re supposed to treat George Bush and Barack Obama like morally upstanding statesmen and Donald Trump like the literal reincarnation of Hitler.”

Gillespie claims above that Trump “escalated bombing campaigns” but, according to Chris Woods of Airwars, he did not, overall, escalate bombings. According to this graphic found on Roaming Charges: New Days, Old Ways by Jeffrey St. Clair (CounterPunch): 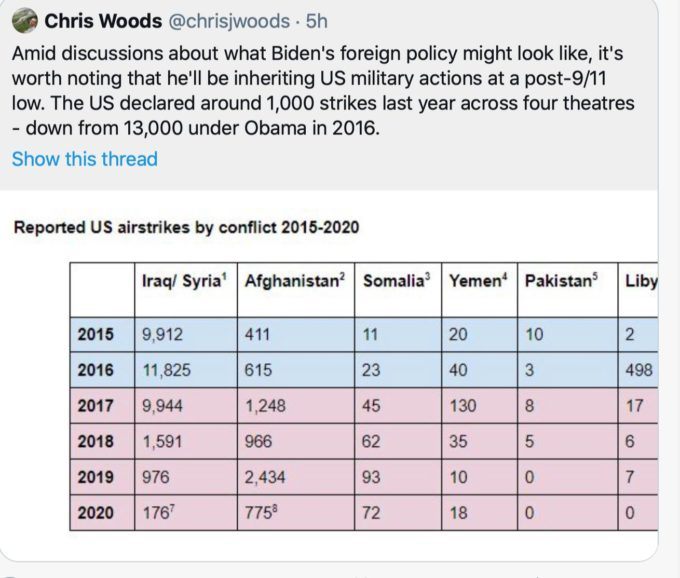 “Glenn Greenwald: This younger millennial set—who are now not that young anymore; they’re in their mid-30s or older and starting to assume managerial authority within these institutions—grew up believing that free speech is not an absolute value, and that it needs to give way in all kinds of instances where more important political agenda items and more important political values are in conflict with it, as they understand it. By which they mean: Ideas and arguments that may endanger marginalized people by making them uncomfortable, or that might lead to the implementation of harmful policies by convincing people to support them, are not ideas that should be heard. They’re ideas that should be suppressed in the name of these greater political values.”

“[Journalists] don’t believe in the right of citizens to confront power centers. They think that reporting means somebody in power, like in the CIA or the FBI, gives you information and tells you to go repeat it to the public. And then you go and do that. And they think that’s reporting. But if somebody’s outside of the scope of power—like some low-level Army private, like Chelsea Manning, who doesn’t occupy an important position in Washington, or Edward Snowden—does the same thing, not with the intention of propagandizing but with the intention of illuminating, they view that as criminal.”