So I bought an M1 MacBook Pro (teacher discount FTW!) at the beginning of October and I’m very happy with it. It’s last year’s model, not the fancy new stuff, but it’s still worlds better than any laptop I’ve ever used. Here are the things I like about it so far.

In short, I only have a couple of minor quibbles, barely even worth mentioning. Whereas I like the Touch-Bar, I wish you could force it into function-key mode without having to press fn. That would be more useful for when I’m in IDEs. For regular use—writing, browsing, viewing, messaging, listening, etc.—the lack of function keys isn’t an issue.

The power plug takes some getting used to: I’d grown accustomed to the 2012 MacBook Pro I’d been using, which still had MagSafe technology. With that one, you can just plug the laptop in without pressing on it. With the USB-C/Thunderbolt adaptor, you have to brace the laptop on the opposite side to get the connector to plug in completely.

I’ve read that both of those issues have been addressed in the newer MacBook Pros, with the M1X and M1Pro processors. MagSafe and hardware function keys are back. I would kind of miss the Touch-Bar, though. It’s very convenient for emojis and spelling suggestions, I must admit.

On the very positive side is energy efficiency. I’ve never heard the fan, even during installations of XCode or longer compilation, which always kicked in the fan on other laptops I’ve used (even on the older Intel-based iMac I have).

Here’s what my first five full days of usage looked like, on a single charge. 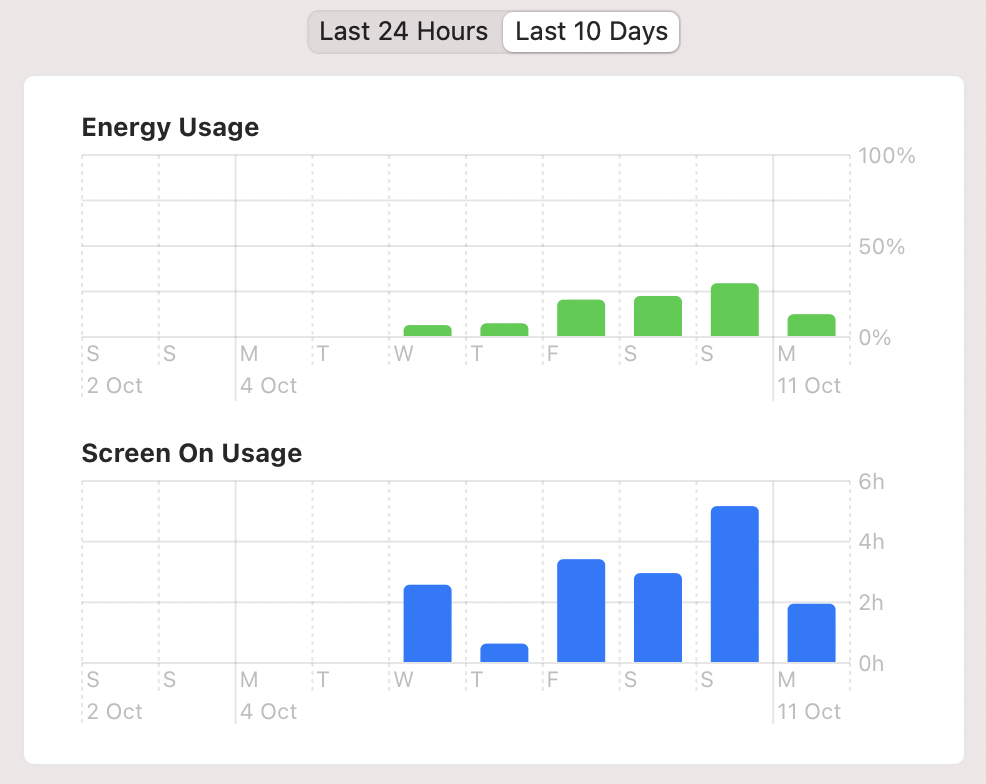 I let it drain right down just to see how it behaves. It’s really very, very nice not to have to always worry about the power adaptor.

Since then, the new MacBook Pros have arrived and are even faster. But you’ll notice that I didn’t mention the speed of the notebook as my favorite part. It’s endurance and silence are much more important to me—because I know that it’s going to be more than fast enough for anything I need to do.

While the new machines are faster—they have more CPU and GPU cores—I noticed that they also don’t last as long on battery. I would imagine that this is due to the larger screen size. The M1 provides more than enough power for a programmer. I think the new laptops would be very attractive for gamers—if anyone were still making marquee games for MacOS. Apple always talks about how fast things render, so they’re probably targeting content-creators (artwork, videos, etc.) with their newer, faster machines. A lot of programmers are going to think that they need the speed as well, and will end up paying a high premium for it, above what they would pay for a standard M1 with a slightly smaller screen.

I stumbled across the article deMoore’s Law by Freddie DeBoer (SubStack). I follow DeBoer for other reasons, not because he is a professional tech reviewer. But, his point is that most reviews are written by people obsessed with CPU performance, which doesn’t matter to most users. As the author writes,

“I find myself skeptical that the average Macbook user is ever going to use even a significant fraction of that power. It reminds me very much of the horsepower war in cars.”

“What I’m not sure about is whether this matters very much: I think few people are CPU-limited in most contexts these days, and power efficiency is less important for laptops than for most other types of tech.”

These are very silly things to write. Of course power-efficiency is important. It’s a device with a battery. It is wonderful that it lasts for days without a recharge. We should all be happy when a device doesn’t need to be plugged in every night. Normally, having a faster processor that you don’t need would be a problem, but the M1 delivers top-end performance while also being very power-efficient. It does this by throttling back its power (and, therefore, power-consumption) when it’s not needed. When it is needed, it’s seamlessly there. It provides a non-stalling experience and doesn’t get in the way of what it’s for: doing what the user wants when the user wants it.

The reason that reviewers run tests with high-end editing tasks is that nothing else makes a blip on the radar for the CPU. They would all be equally fast. It would be like playing the original Doom on any modern CPU. It just runs at 300FPS or more. Or testing how quickly a car goes from 0–5kph. The answer wouldn’t tell you anything. A machine that delivers amazing high-end power will most likely use a lot less power to deliver much lower-end power, is the point they’re trying to make, I think.