Why are people not getting vaccinated?

People in Switzerland are pretty much done with being vaccinated, according to the video report FOKUS: Impfbereitschaft in der Schweiz am Limit (SRF), Switzerland has managed to fully vaccinate 63% of the population (64% at the time of writing) but pretty much everyone who’s not gotten vaccinated yet is not planning to do so. 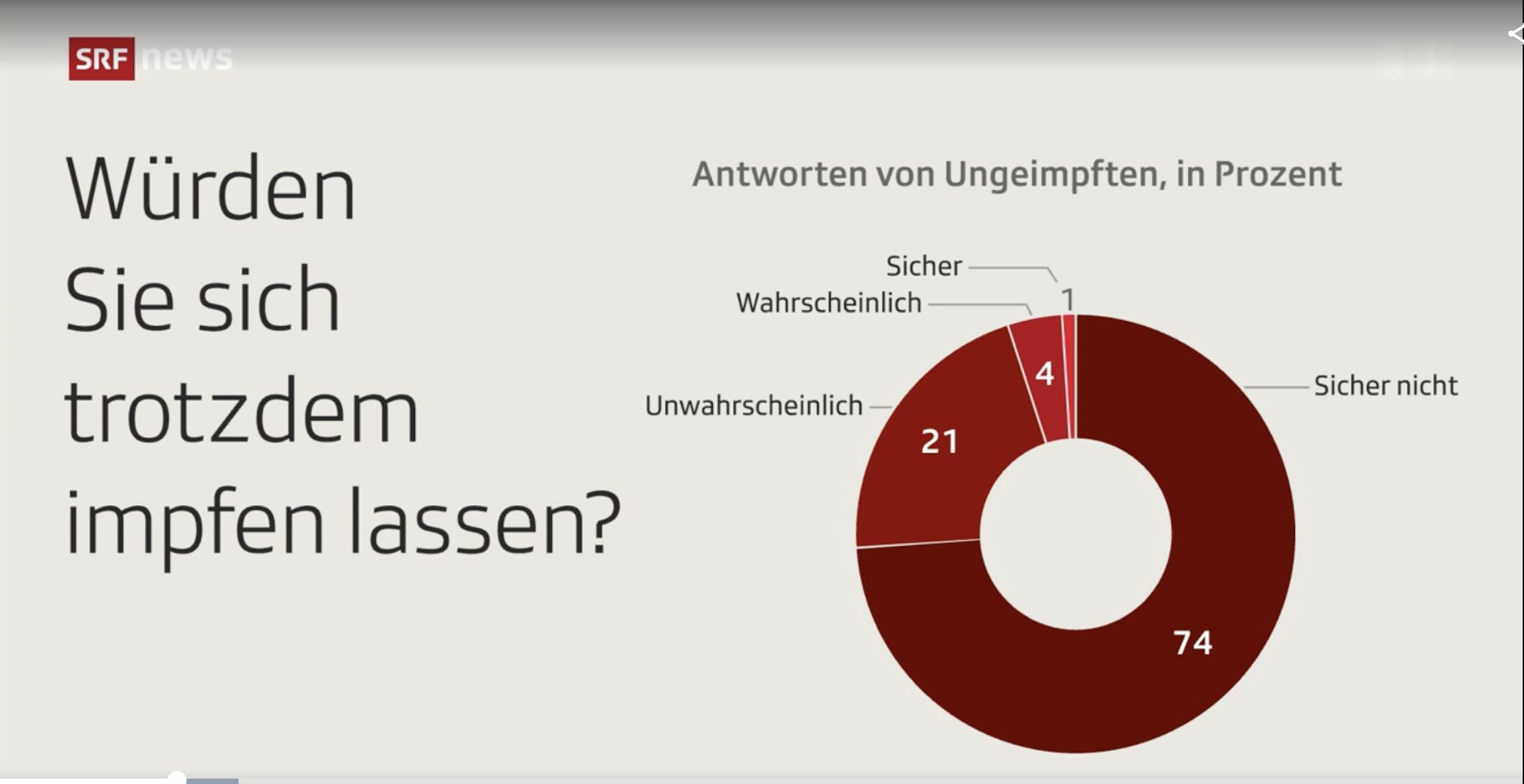 Why are they not getting vaccinated? According to the screenshot below, for 78%, it’s because they “fear harmful effects” from the vaccine itself or they think that they are healthy enough to withstand COVID without the vaccine. 68% don’t think that the vaccine works anyway, and 44% are not getting it out of spite: they don’t like being told what to do.[1] 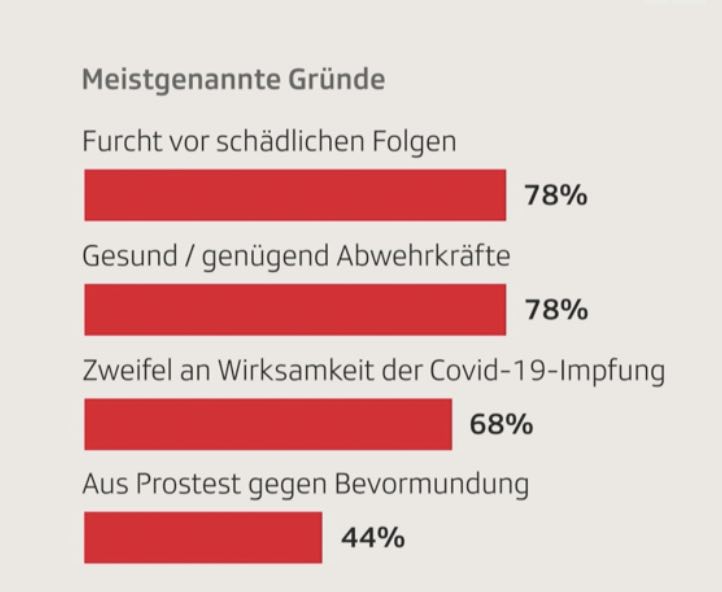 It’s understandable that, if you think that the vaccine doesn’t work and it will harm you, that you don’t want to get it. You’d have to really look away from the enormous pile of evidence to the contrary—i.e. 63% of Switzerland has it and we’re not all dying in droves—but that’s why this is more of a religious question than anything else. They just believe in these things. Faith doesn’t need evidence.

Unfortunately, they’re completely forgetting that we live in a society and, as members of an advanced social-welfare state, you have some duties and obligations to go with your massive privileges; those duties include not only thinking of yourself when you’re fabricating a worldview full of shadowy perpetrators of doom, but to think of the people who can’t afford to indulge in flights of fancy because the reality of COVID for them is very real. This is called solidarity.

It doesn’t matter if they’re pretty sure that COVID won’t hurt them personally—they have to think of all of the people that their getting COVID will potentially infect who aren’t as strong or amazing—or young and healthy—as them.

To be fair to them, though, can we really fault these people for only thinking of themselves? Isn’t that what our advanced societies hammer home into our heads, day after day after day, with marketing and advertising and just general ideology through media? Can you blame them if they completely forget about duties no-one ever bothered to tell them they have, because those duties might cause them to restrict their consumption and think of others.

You can’t sell unnecessary stuff to modest people who care about others and their planet. And selling unnecessary stuff is our jam, man! That is literally how the entire world economy works: everyone buys stuff they don’t need so that other people have jobs creating stuff no-one needs. If too many people jump off of this carousel, it stops turning.

Just as an example for how people could be misled into thinking that the vaccine not only doesn’t work, but that it actually kills everyone, there’s this “article”[2] as an example: They will (gladly) kill 117 children to (theoretically) save ONE child from “death by COVID” by Mark Crispin Miller. It claims to be based on several “studies”[3]. These studies seem to exist, but the conclusions that they draw are completely at odds with reality.

These people are in a cult. They are not unlike the people who continue to follow a leader who keeps mis-predicting the day of reckoning. They believe the study, but then hand-wave the fact that people are not dropping like flies. They think, instead, that the entire world is engaged in a cover-up. That no-one is talking about this other than them, even the families of the people affected.

They think that literally billions of people are too scared to say that the vaccination has killed their family and friends. Not only that, but that they then line up to get the vaccination themselves. People like Miller think that this is completely plausible—that he and his sources are the only ones with their eyes open enough to see what’s really going on. Everyone else is just cowed into saying nothing about the government having deliberately killed 90% of their families. Just because you don’t know any of these people that have died doesn’t mean that it’s not happening. Wake up, sheeple.

Look, you can decide not to get the vaccine, fine. But you don’t get to believe in this obvious claptrap. It’s just not even on the scale of plausible.

Miller—a “Professor of Media, Culture, and Communication” at New York University, who teaches courses on how to interpret propaganda, ironically enough—discusses the analysis by completely ignoring selection and confirmation bias with the following abstract.

“That’s according to a risk-benefit analysis done by risk-benefit expert Dr. Toby Rogers. His analysis has been viewed by over 22,000 readers. No mistakes were found. Nothing but praise.”

Miller questions everything but this kind of stuff, oddly enough. I get that he’s suspicious of the mainstream media, but there’s no reason to then believe nearly everything that’s not mainstream. I sometimes wonder whether his web site is just him perpetrating a big joke. I continue to follow him because I like to keep my thumb on the pulse of many segments of thought—including the ones that I personally don’t believe, but a lot of other people do.

The doctor who wrote the original article summarized,

“[…] to put it simply, the Biden administration plan would kill 5,248 children via Pfizer mRNA shots in order to save 45 children from dying of coronavirus. For every one child saved by the shot, another 117 would be killed by the shot.”

What are the odds that this is true? Do none of these people ask themselves that? What are the odds that one or two people on SubStack are the only ones who see that the Biden administration is not only comfortable with, but actively promoting, killing children, in the name of … what? What’s the purpose behind this? Do they even bother coming up with a mens rea?

And what is the likelihood that the Biden administration—which has very much stumbled out of the gate on everything else—is competent enough to kill a bunch of children without anyone knowing about it? Like, if that was their goal, what makes these people think that the Biden administration would be competent enough to actually hide it from everyone except these few geniuses on SubStack, who see through the subterfuge?

Miller sums his take up with “Not surprising to me.” Of course it’s not—because he’s so far down the rabbit hole that he hasn’t seen daylight in years. He goes on to cite the popular, libertarian, non-solidarity description of mortality rates by age cohort:

“[…] people in the 65+ demographic are five times as likely to die from the inoculation as from COVID-19 under the most favorable assumptions! This demographic is the most vulnerable to adverse effects from COVID-19. As the age demographics go below about 35 years old, the chances of death from COVID-19 become very small, and when they go below 18, become negligible.”

This is all true, but the conclusion that they draw—that no-one under 35 needs to be vaccinated—is completely wrong for battling a pandemic. The reason we sheltered in place and put up with lockdowns and “remote all the things!” was because we pulled together as a society to help protect the most vulnerable parts of the population.

Younger, less vulnerable people should get vaccinated not so that they themselves won’t die—an eventuality with low likelihood—but so that they don’t catch COVID and pass it on to more vulnerable populations. Older people don’t have good immune systems and, even with the vaccine, will still be more likely to catch a disease than much younger people.

But this logic doesn’t seem to hold for very long. Even here, in Switzerland, where solidarity is at least somewhat more popular than in the U.S., people pulled together for a few months, but then their need to go on vacation overrode any social instincts they had. People decided that pulling together was all well and good, but that they should be able to decide when it’s over. And they’ve done that. So, back to our scheduled programming of egocentricity.

[1] I can confirm that these are exactly the arguments I hear from unvaccinated friends. They do not believe in the vaccine’s efficacy; instead, they think that it is harmful. Even if it were to work, they don’t think that they need it, because they’re strong and healthy. That is not how disease works, but OK. At least one good friend said right out that, because it’s being pushed so hard, that he’s now much less likely to get it, just out of spite. Take about cutting off your nose to spite your face.↩
[2] I put the word “article” in quotes to indicate that it’s not really a piece of writing in the same way that Miller always writes “vaccine” in quotes to indicate that it’s not a preventative for disease, but an injection likely to lead to immediate death.↩
[3] Oops, I did it again.↩