A note on Rush Limbaugh (and others like him) 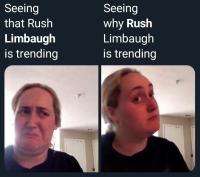 A friend recently sent me this meme to note that they’d missed it when it was still relevant. That got me thinking, naturally.

What word should we use to describe Rush? “Genius” is not inappropriate, is it? I mean, he didn’t just carve out a niche; he carved out an empire. He knew what some people wanted to hear and he figured out how to get more and more people to want to hear it. He knew how to sell it. It seems like his radio persona matched his private persona[1], so it’s not even clear that he was “acting” in order to advance his career and fortune (like many do). But I have no idea, really. Everything I know about Rush is what he told me through things he said in public or that he arranged for his vast media empire to tell me about him.

It’s really important not to forget how prepared our information and entertainment are. We tend to forget that people like Rush are in the acting business, the business of selling a “show”, not of detailing to us how they really are or what they really think—or how things really are. These people show a persona that they think will make money and/or will deliver the message they’re interested in sending, if they’re ideological at all. Some are in it just for the money. Most have at least a kernel of worldview that they want to impart, but not all.

Many big televangelists are like this—they don’t even really believe in God, they believe in Mammon. But friends and foes alike are convinced that they believe what they’re saying. David Koresh didn’t believe in his cult’s precepts; he just made them up because he wanted to sleep with a bunch of different women at once. Dave Chappelle wants America to stop beating on his people. Joe Rogan is more of a blank slate, I think, but probably free speech and legal drugs are his hobby horses.

Rachel Maddow is definitely following in Rush’s footsteps with her rage machine—it’s unclear whether she’s drunk her own Kool-Aid, though. It really seems like it—but maybe that’s part of the show, part of her genius. If her fans could tell she didn’t mean it, then she wouldn’t be as successful as she is. That’s how it for any of these people. You look like a crazed dingbat to your enemies because that’s what works the best. It’s the only way to truly convince your supporters. Those of us on the sidelines have no way of knowing the truth, one way or another.

Trump is another who follows this model and he has no clear agenda outside of “make Donald Trump popular and rich”. I just read a review of a biography of Viktor Orban[2] (leader of Hungary for the last 10 years) that indicates that Orban is pretty much a Hungarian Trump. Given that Orban showed up on the (political) scene first, that makes Trump an American Orban. Orban was better at it, though: he changed the constitution to basically institute a stranglehold for his party. Trump was never that ambitious or politically talented.

With their ability to generate success in this world, these people all geniuses by that definition. Our ideological enemies and allies alike, if we’re being honest. They don’t create anything of lasting value that will help humanity (in my opinion!), but they have certainly figured out the current system to such a degree that they can profit from it immensely.

Rush was kind of a pioneer of the “be loud and be heard” reality/fiction mode of information-dissemination/entertainment that has come to dominate nearly everything these days. I wish he hadn’t done that, but he wasn’t an idiot. And I wasn’t happy to hear he’d died. I just didn’t care one way of the other. I was happy to hear that Donald Rumsfeld died. He’d done real damage. He was in a position of power—for a long time—in a way that Rush really was not.

You could argue that people like Rush enabled Rumsfeld; without a good propagandist, a Rumsfeld is less effective, I guess. But Rush was no Goebbels—his focus was always laser-like on self-aggrandizement, not on anyone else’s agenda. He used their agenda where it served his primary purpose, but he wasn’t married to it. He could turn on a dime when it suited him. That’s all part of the show—sometimes there are continuity issues, but the geniuses forge on and make you forget all about them.