It’s that time of year again.

That means the TacX comes out of the basement and I am, once again[1], confronted with the awfulness that is TacX Desktop. I fired it up and was confronted with all of the same bugs and UX missteps that I’d noted a year ago. It’s like the app hadn’t been updated at all.

I got suspicious because I have a friend who uses his TacX regularly and he wouldn’t put up with this crap…so what is he using? I searched the App Store again (MacOS) and found a TacX Training app as well as the TacX Desktop app I already had.

tl;dr: Good news: The TacX Training is a much better app than TacX Desktop. It’s the same app on iOS as well. 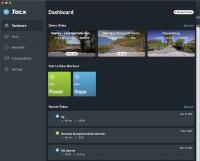 TacX Training DashboardThe TacX Training App seems fine, so far. I don’t use the movies or the training plans or anything but my own workouts. I have seen some user comments complaining about the “opponent” feature, but I’m not using that.

I’m not really interested in watching a video of the outdoors in the summer—I’d rather watch a more-distracting TV show or movie—or in competing against random people[2], or in a training plan that makes me sit on the bike for 90 minutes, pedaling at 50% or 68% power. If I’m going to sit on a bloody bike indoors, it’s not going to be for a recovery ride—I’ll just go for a walk or hike outside instead.

I’d offer the following suggestions to the developers, but that’s all I can think of right now.

The two previous articles were,