The DACH region ([D]eutschland, [A]ustria, S[CH]weiz) is looking down the barrel of its worst COVID wave yet. We are a good 20 months into the pandemic and nearly a year after the general availability of a highly effective vaccine. To be fair, most people under 65 were not able to get the vaccine until May or June (in Switzerland, at least). However, it’s been 5 months since then.

Stuck in the lifeboat

That’s more than enough time for a civilized and well-educated public to do the right thing for itself, no?

It’s more than enough time to patch the hole in the bottom of the boat. Instead, we’ve got 1/3 of the population claiming that the hole in the bottom of the boat either doesn’t exist—despite the water rushing in and (A) making a lot of noise and (B) making everything wet and (C) bringing the gunwales uncomfortably close to the surface of the water—or that we don’t really need a boat without holes, or that each person should be able to decide for themselves whether the hole should be patched, or that their own personal beliefs are more important than the reality of a gaping hole on a hostile ocean. So, here we are! These are the people in our lifeboat! There’s nothing for it but to soldier on, nurture sweet dreams of tossing them overboard, but still try to get everybody to shore intact. It’s a terrible burden having principles and morals sometimes.

How are we doing? 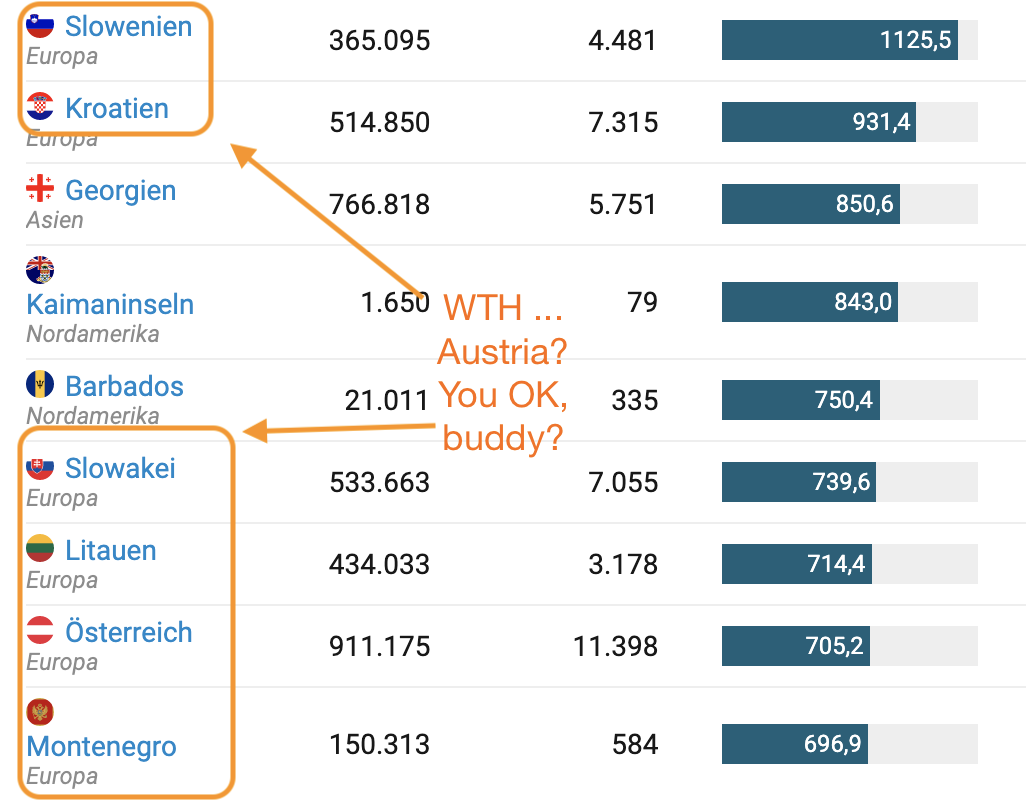 Incidence Levels through the Roof

The countries that have it under control—Spain, Portugal—are those with very high vaccination rates. Go figure.

Most of the countries where it’s hitting hardest were proudly declaiming that they’d dropped all COVID measures and had declared their vaccination campaigns complete at about 60-65% penetration. Most of them did this for nakedly political reasons—Germany just had a big election[3]—as if the virus gave a shit. The virus does not care. It grinned from ear to ear, affixed a bib around its neck, grasped a fork in its right hand, a knife in its left, licked its chops, and dug right in.

What do we do?

So far, the disease has not been deadlier than it was in other waves, but hospitalizations lag cases…and deaths lag hospitalizations. It’s really only a matter of time. People hoping that we’re leaping somehow to herd immunity only have 2-3 more years to wait for that little dream to come true. In the meantime, all human medical efforts will be directed toward fixing the effects of a treatable disease for which we have a very effective vaccine.[4] During this time, precious little else will get done because (A) we’re not great at concentrating on multiple things at once and (B) it will be extremely lucrative to be addressing the only disease anyone cares about, so the brain drain will be enormous.

What’s a better solution? The same as it ever was: vaccinate (get the booster as soon as you can![5]), keep your distance where possible, wear masks indoors (where it makes sense), keep your contacts down, etc. Nothing has changed in how we could tackle this. We have completely lost the will to solve big problems. People are more focused on their own personal rights—no matter how small—and believing in fairy tales about the vaccine than in pulling together to beat this thing. The virus is winning.

Hell, we won’t even get the chance to square off against the big boss: climate change.

The article Covid cases are surging in Europe. America is in denial about what lies in store for it by Eric Topol (The Guardian) has more information.

“The impact of waning, and the opportunity to restore very high (~95%) effectiveness of mRNA vaccines (specifically Pfizer/BioNtech) with booster (third) shots has been unequivocally proven from the Israeli data. Yet the adoption of boosters, even in the highest-risk groups such as age 60 plus, has been very slow.”

“Throughout the world, the profound pandemic fatigue has led to the irresistible notion that the pandemic end is nigh, that masks, distancing, and other measures have run their course, essentially that enough is enough. It is hard to imagine fighting a foe as formidable as Delta that a vaccine-only strategy can be effective.”

“That brings us to the United States, sitting in the zone of denial for the fourth time during the pandemic, thinking that in some way we will be “immune” to what is happening in Europe. That somehow the magical combination of mRNA vaccines with only 58% of the population fully vaccinated, a relatively low proportion of booster shot uptake, a start to vaccinating teens and children, and a lot of prior Covid, and little in the way of mitigation, will spare us.”

“We are already seeing signs that the US is destined to succumb to more Covid spread, with more than three weeks sitting at a plateau of ~75,000 new cases per day, now there’s been a 10% rise in the past week. We are miles from any semblance of Covid containment, facing winter and the increased reliance of being indoors with inadequate ventilation and air filtration, along with the imminent holiday gatherings.”

The article Pentagon dispatching emergency medical teams to Minnesota as another winter surge of COVID-19 infections takes hold in the US by Benjamin Mateus (WSWS) writes,

“Though Europe is in the midst of the worst wave of infections since the beginning of the pandemic, the rise in COVID-19 cases in the US has many concerned about what awaits the country, especially with Thanksgiving and Christmas holidays around the corner. With all travel restrictions having been lifted, population mobility is at an all-time high, and mask usage is rapidly declining.

“The situation is all the more alarming because most countries in Europe have vaccinated a far larger share of their populations than the US. Though the US is calling for all adults to get the third shot, also known as a booster, only 31.5 million, or less than 10 percent, have received them. Additionally, a significant number of fully vaccinated people received their last shot more than six months ago, meaning their waning immunity places them at increased risk of breakthrough infection.”

↩
[3] Switzerland has a COVID initiative that has to pass on Sunday, the 28th. If it doesn’t pass, then it will be more difficult to the federal government to react quickly, as they now can with the Pandemiegesetz. However, if they actually react as they should now—i.e. expeditiously and following Germany and Austria’s lead—they might sour enough people into voting against it. I.e. “You see! They’re abusing their power! OMG!” This is a terrible thing because Switzerland really needs to react quickly and decisively, but politics might get in the way here, too.↩
[4]

Just because the efficacy fades after six months doesn’t make it a bad vaccine, all of a sudden. It just means that we need three shots, not two. They’d only had the chance to test efficacy for two shots and that’s what we went with. It bought us six months of protection. Studies have now shown that a booster shot shoots that efficacy way up, so three shots seems like the sweet spot. Probably another shot will be necessary next year as the virus continues to evolve. This is not dissimilar to the flu vaccine.

This is a point entirely missed by diehard anti-vaxxers, who grasp at any perceived deficiency to reinforce their view that the vaccine kills everything it touches—and was a giant waste of time in the first place, anyway. For example, the article Onward Into Darkness by James Howard Kunstler (Clusterfuck Nation) writes,

“Was it reassuring to see Dr. Anthony Fauci declare on MSNBC: “What we’re starting to see now is an uptick in hospitalizations among people who have been fully vaccinated but not boosted”? And the moral of that story? Get more of the same thing that’s not working — and if you don’t volunteer to get it, maybe we can find a way to force you.”

How much energy does it take to constantly misinterpret everything? This is not a stupid man, let me assure you. He’s perfectly capable of the most lucid and incisive analysis. Perhaps that the problem: he’s intelligent enough to be able to turn every new bit of information to fit the puzzle he’s already nearly completed. Why start a new puzzle? Why undo the bits that don’t quite fit. It looks fine. All he has to do is ignore the fact that most vaccines work like this. Almost none of them are “one and done”.

“As the Delta variant became the dominant strain of the coronavirus across the United States, all three COVID-19 vaccines available to Americans lost some of their protective power, with vaccine efficacy among a large group of veterans dropping between 35% and 85%, according to a new study.”

“By the end of September, Moderna’s two-dose COVID-19 vaccine, measured as 89% effective in March, was only 58% effective.

“The effectiveness of shots made by Pfizer and BioNTech, which also employed two doses, fell from 87% to 45% in the same period.

“And most strikingly, the protective power of Johnson & Johnson’s single-dose vaccine plunged from 86% to just 13% over those six months.”