This is the latest roundup of book titles that my Kindle shows me when I’m not reading it. Long ago, I considered paying to turn off this advertising, but it’s proven to be so entertaining that I’m happy I never gave in.

This is a view into what people are reading or what Amazon would like people to be reading or … whatever. I simply observe and catalog. I also sometimes have to hide my Kindle in public places so that no-one calls the police for what they think I’m reading.

Bethlehem, NC and other Stories 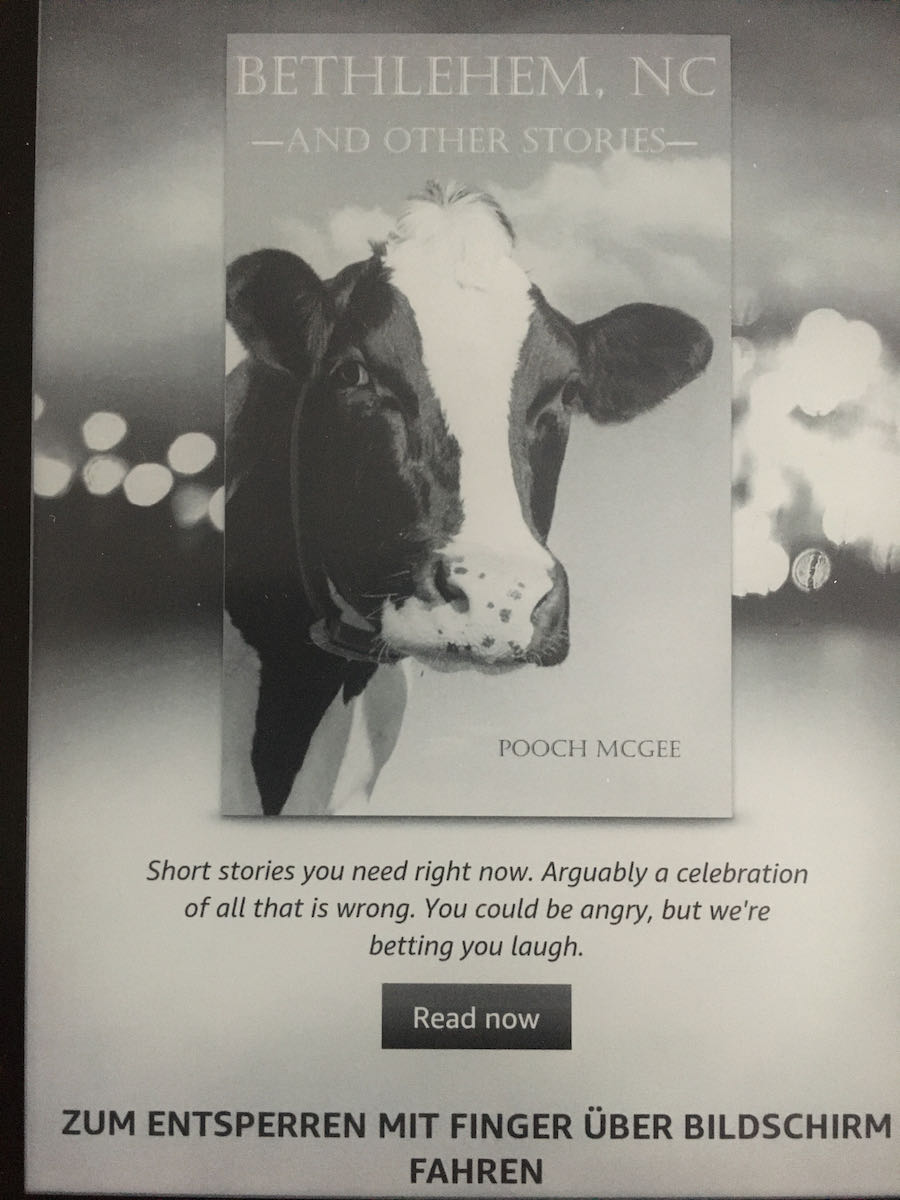 Bethlehem, NC and other Stories

“Short stories you need right now. Arguably a celebration of all that is wrong. You could be angry, but we’re betting you laugh.”

The author’s name is Pooch Mcgee. There is what looks like a walleyed cow on the cover. I have no idea what this book is about from the blurb. Is it about a town in North Carolina? Why would I be angry about that? Because the author celebrates what is wrong? 60% chance this was an AI—it’s certainly possible that this person either has English as a second language or they took a marketing class and just threw everything they had at it.

Double Life: The Other Girl 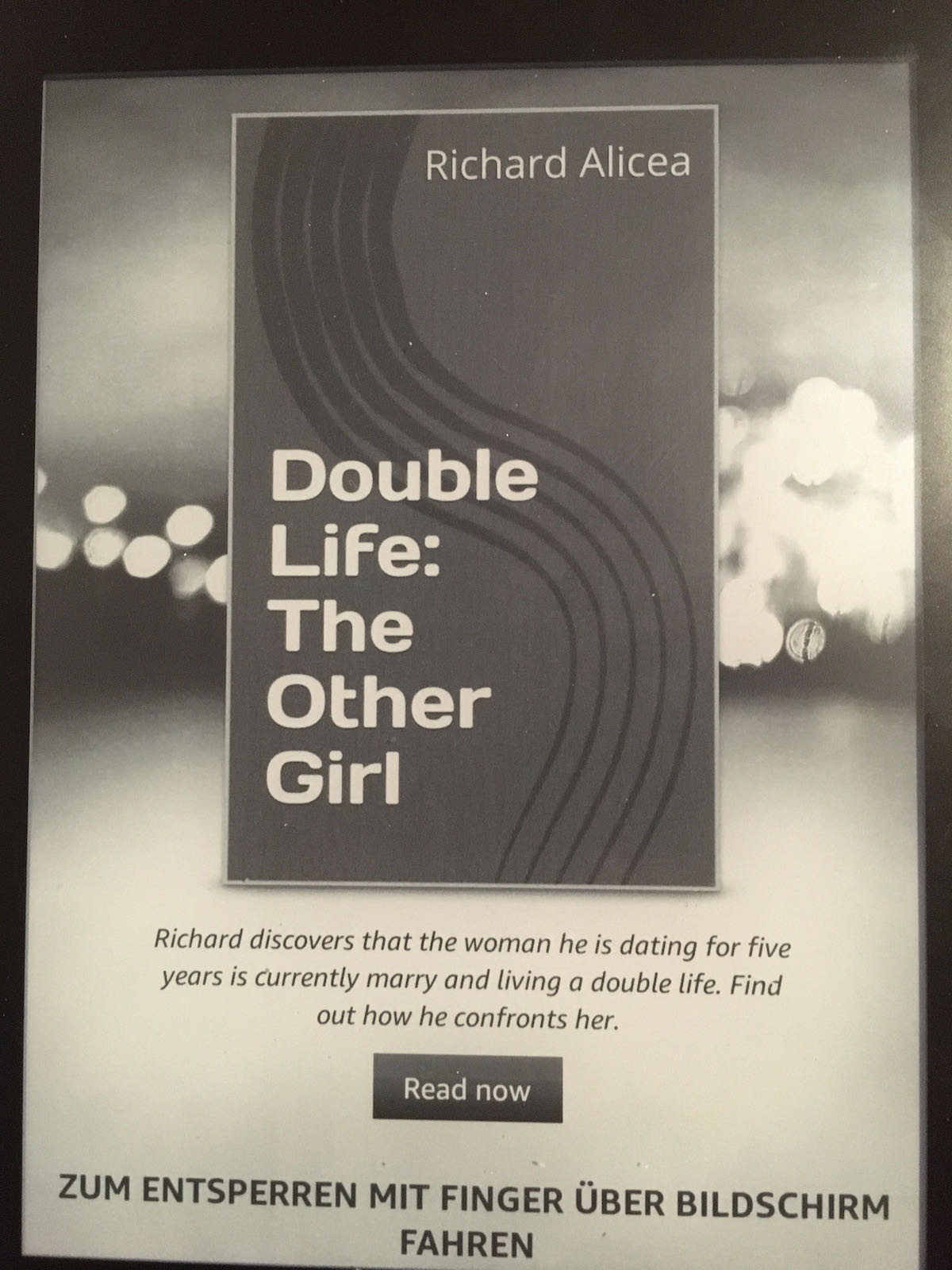 Double Life: The Other Girl

“Richard discovers that the woman he is dating for five years is currently marry and living a double life. Find out how he confronts her.”

If the author wrote the blurb, I can’t imagine what a wild ride of mis-conjugation the book itself has to offer. “the woman he is dating for five years” is non-sensical. It should be “the woman he has been dating for five years”[1]. However, it’s not surprising that this form of conjugation stymied the author since he/they also can’t conjugate in the simple past—“currently marry” should be “currently married”. 30% chance that this is an AI. AIs write weird things, but they generally don’t fall into these kinds of errors. This seems very much like a human with poor English grammar (or some poor soul writing blurbs in a second language). On the other hand, maybe that’s what the AIs want you to think.

The Boltons of the Little Boltons 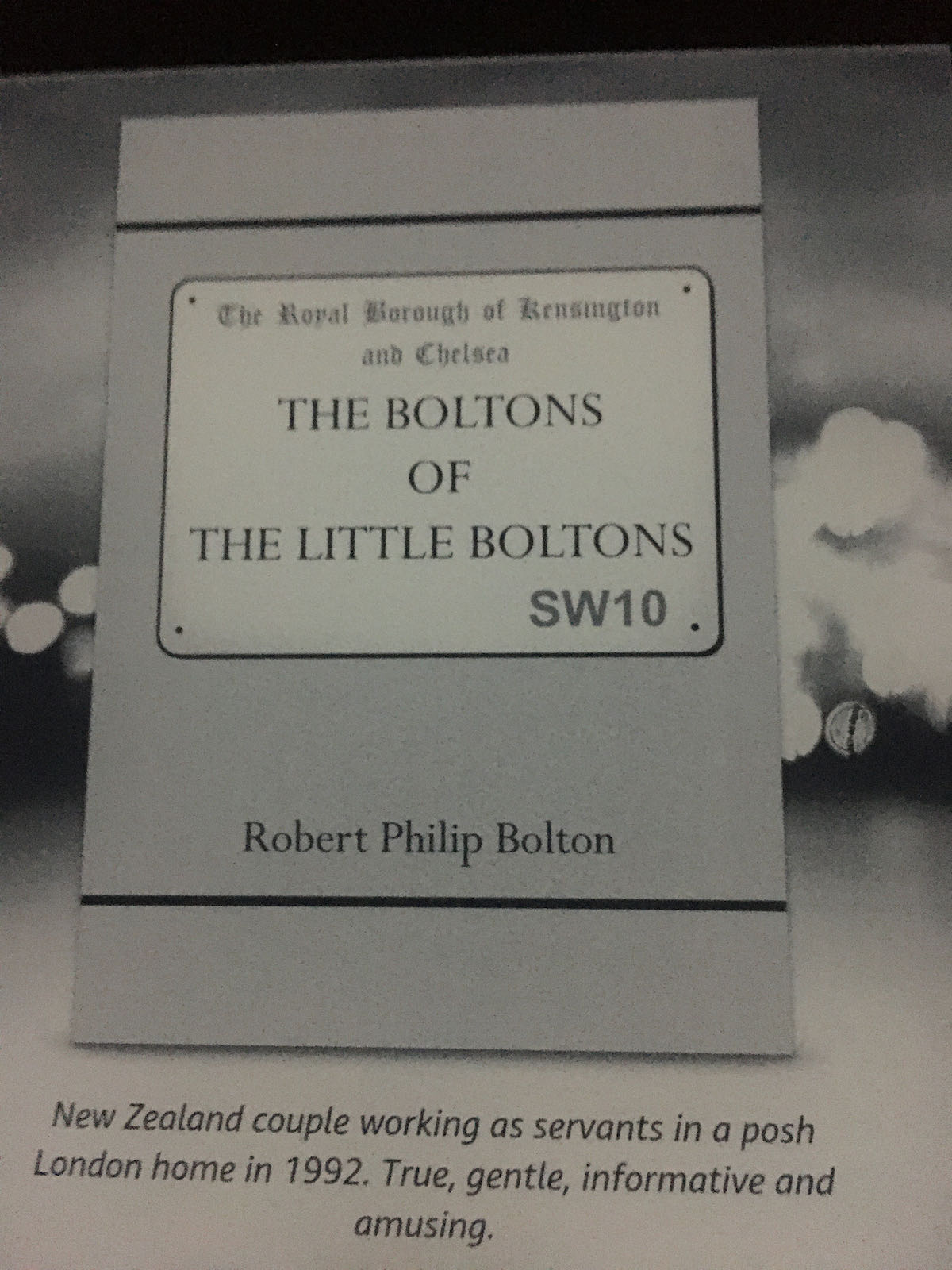 The Boltons of the Little Boltons

Neither of those two fragments are sentences. They are, however, reasonably well-constructed. On its own, the blurb isn’t that weird, but combined with the rest: “The Royal Borough of Kensington and Chelsea” and what’s up with the “SW10”? And why does the author’s last name match the name mentioned twice in the title? The whole cover looks like a school-play pamphlet. Altogether weird. 80% chance that this is an AI throwing shit at a wall to see what sticks.

The singular adventures of a strict Buddhist: a barrage 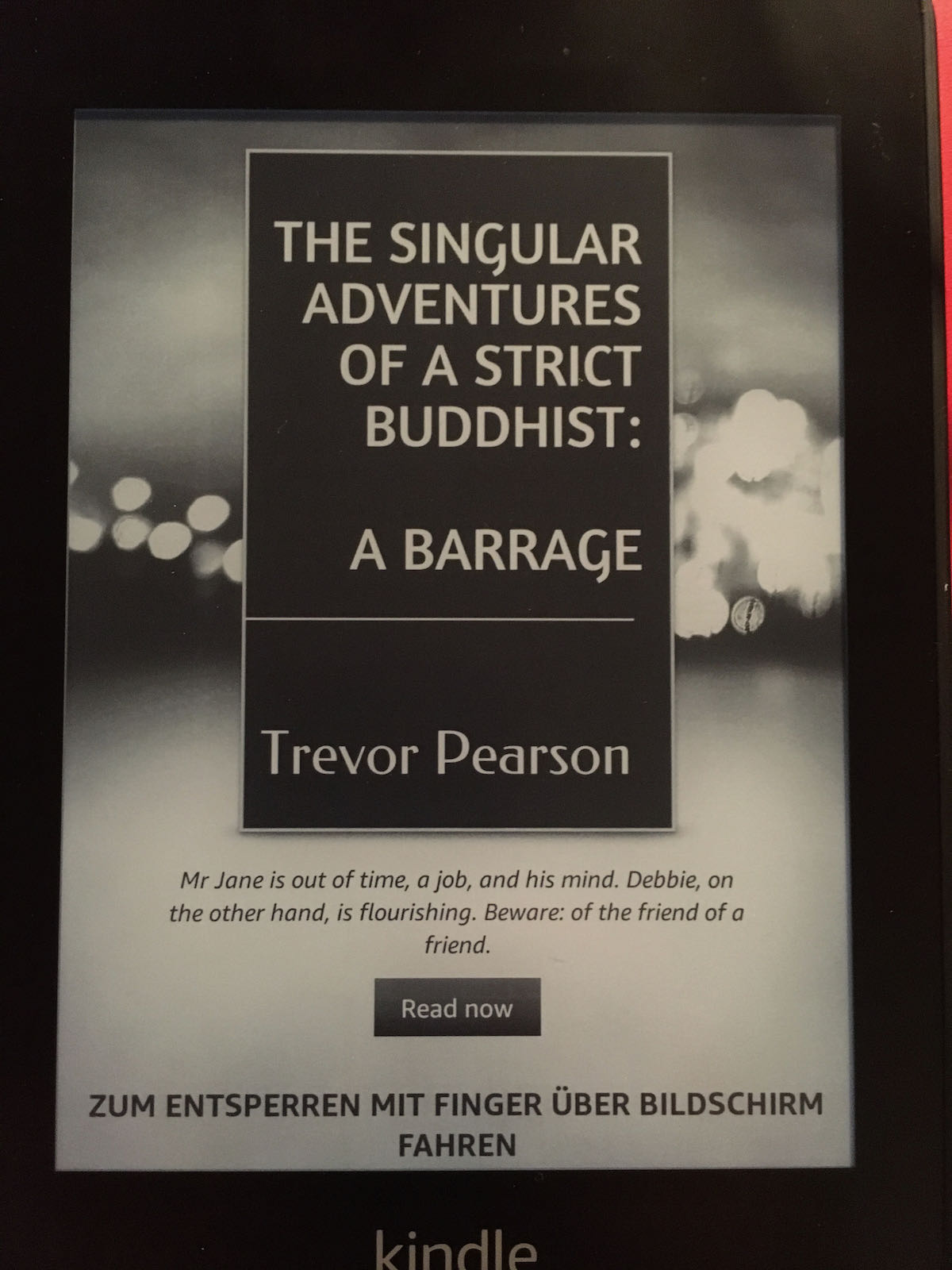 The singular adventures of a strict Buddhist: a barrage

“Mr Jane is out of time, a job, and his mind. Debbie, on the other hand, is flourishing. Beware: of the friend of a friend.”

The punctuation suggests a British origin (no full-stop after “Mr” and an oxford comma). The last sentence has a superfluous and distracting colon in it. Otherwise, the text is fine. The cover is odd: why is there a whole line between the colon and the subtitle? Why is the “G” the only letter with such a strong flourish in that font? Why is the author’s name not centered, but also not left-aligned with the title? Why does the line separating the title and author stop short of the right margin, but not the left? 50% chance that this is a very good AI. 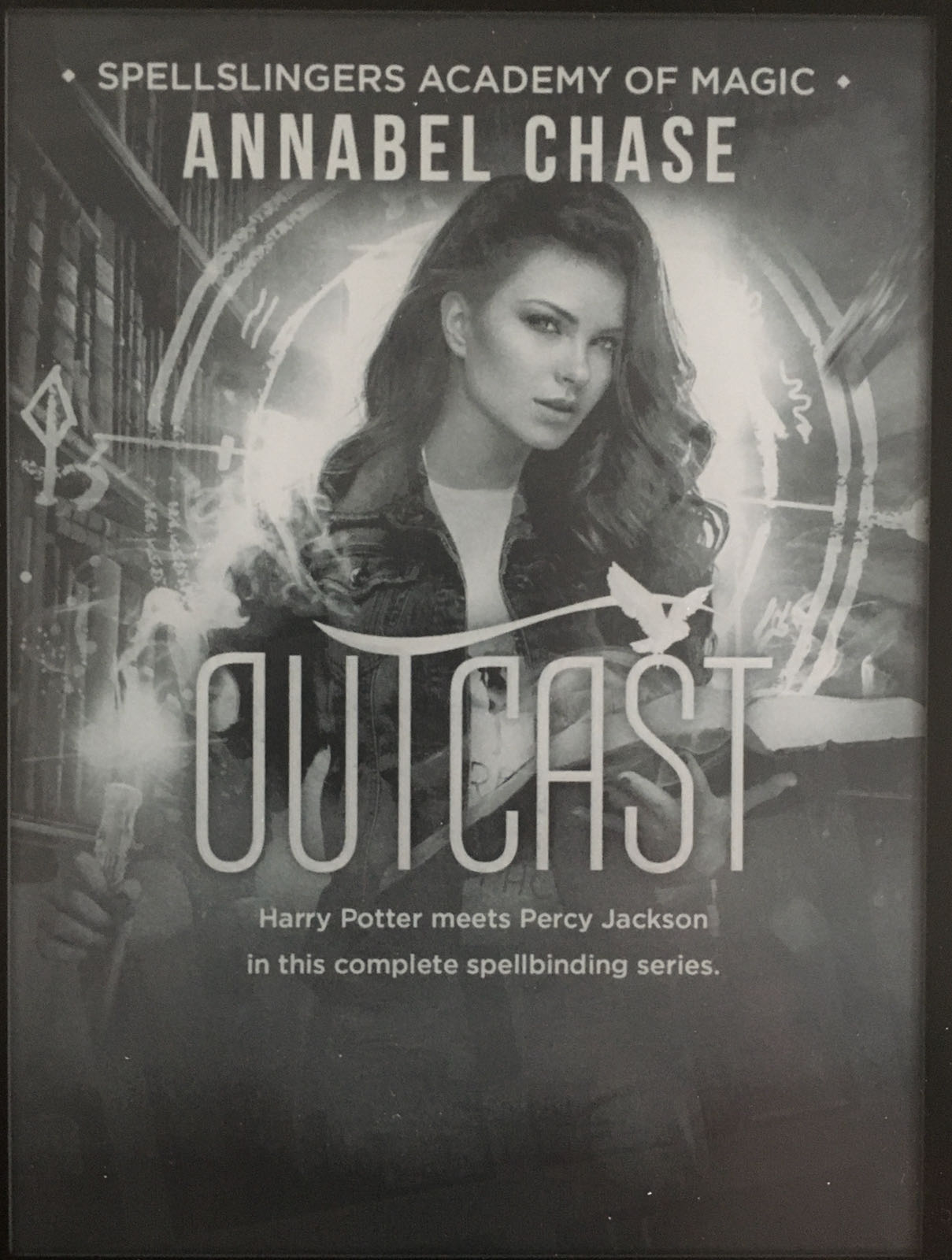 This is just a lazy summary. I’m almost certain they meant to write “completely”, not “complete” but I’m a stickler for adverbs, so what do I know? Maybe they meant to say that the book is “complete”, as in it was released after they’d finished it. It’s a bit of a weird flex but, again, what do I know? What I don’t know if that there is a girl on the cover and the text says that the book is “Harry Potter meets Percy Jackson”, both (ostensibly) male characters. But here I go again, making assumptions. The author’s name is 100% fake and the series title includes the nearly definitionally illegible “spellslingers”. I give it a 70% chance that this one was hashed together by an AI.

What to do with a Dead Boomer 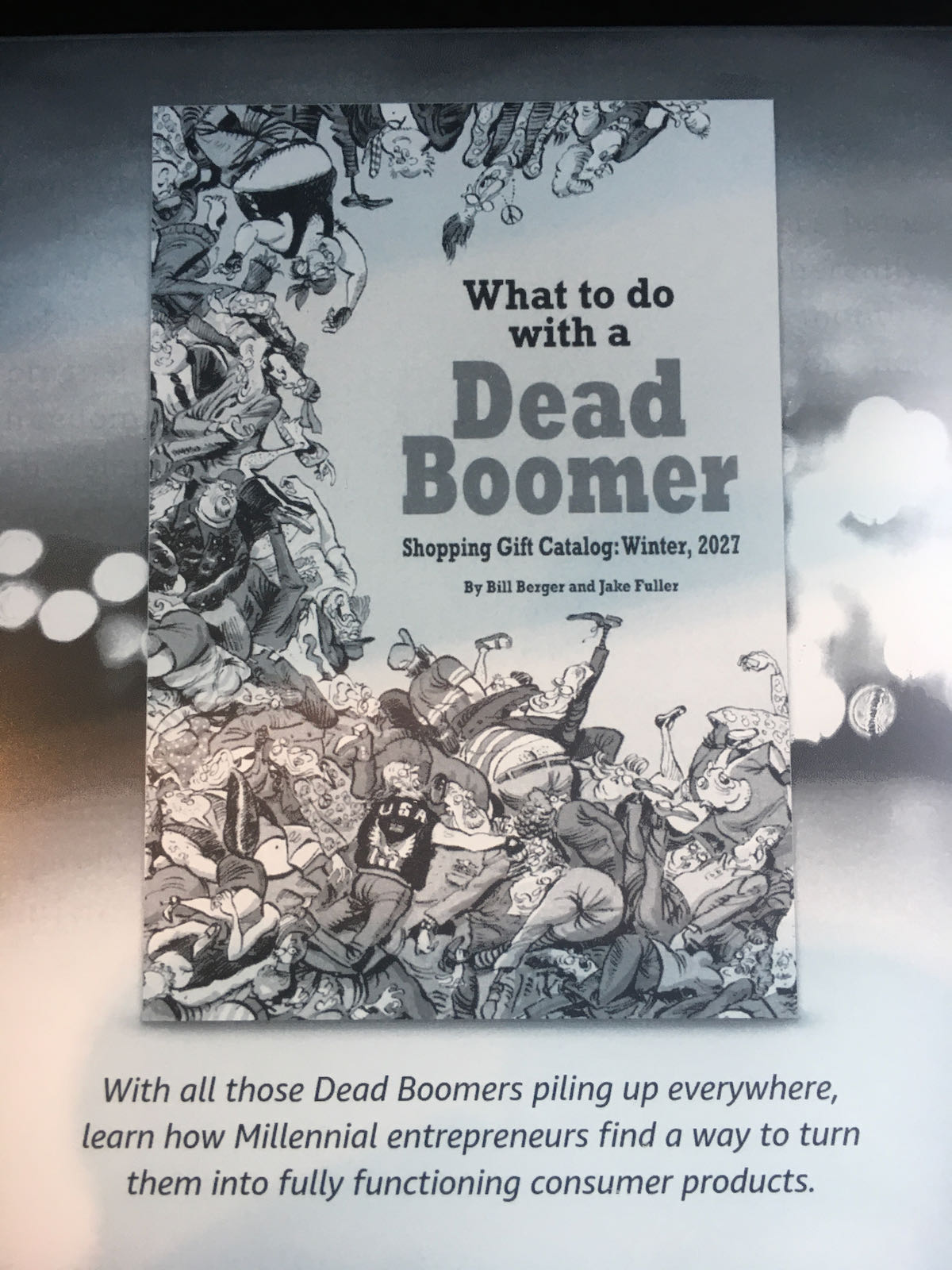 What to do with a Dead Boomer

“With all those Dead Boomers piling up everywhere, learn how Millennial entrepreneurs find a way to turn them into fully functioning consumer products.”

These kind of things never age well. Just because the slur is quasi-acceptable today doesn’t mean you should put it on the cover of a book. Let’s imagine this cover with other quasi-bygone slurs, like, what if you wrote a book called “What to do with a Dead Jew”? You had better be super-clear that you’re the second coming of Philip Roth or that you, at the very least, are a serious writer and have every intent of backing up your provocative title with serious analysis of the sickness of a society in which that title even has a chance of being satirical. If you just “meant it as a joke”, then things will not go well for your book sales.[2] The same analysis applies for “N___er” or “Fa__ot” or supply your own slur.

There is no chance this was written by an AI. They are too smart to do this already. It had to have been one or more humans.[3]

[1] In English, the verb form must correspond to the temporal gist of the sentence. You just can’t say “he is dating for five years”. You can do it, of course. People will probably understand what you’re getting at, but you’re putting the interpretive burden on the listener, which used to be frowned upon. English has two forms for this (I don’t know their official names). If he is still dating her, then it should be “the woman he has been dating for five years”. If he is no longer dating her, then it should be “the woman he had been dating for five years”.↩
[2] HAHAHAHA I’m kidding, of course. Your book sales will skyrocket as both people who support your irony-free list of ideas and those who hate the fact that they are not legally allowed to kill you will buy your book—the former out of fervent support and the latter out of spite. This is the world we live in, folks. A world of unbounded luxury that allows us to squander the precious moments we get—before the lights go out again—on utter bullshit.↩
[3] You may be thinking to yourself, “Duh, yeah. It has two authors right on the cover,” but you are forgetting that nothing is ever true anymore. Nearly everyone writes under a pseudonym (or pseudonyms) tailored to fit the intended audience’s perception of what the author’s name should be. We live in a world of artifice, grasping for truth.↩