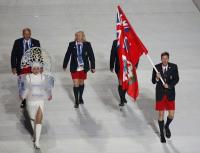 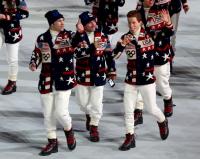 Let’s get the initial unpleasantness with the fashion choices of various countries out of the way at the top. In no particular order—which alphabet would I use?—and leaving out countries with no particular reason, here are my bitchy notes. Some of the nations are pictured on the left but not all.

TIL that Prince Hubertus of Hohenlohe-Langenburg (Wikpedia) is a 55-year–old native Mexican alpine skier who is once again in attendance at the Olympics, his sixth. Whereas in 2006 Mexico declined to send a one-man delegation, in 2014 he got to carry the flag.

The main show is quite nice, very colorful and whimsical. Kind of reminds me of Miyazaki. Tall, misshapen and bizarre creatures wind their way across the arena, accompanied by giant onion towers that could just as well be mushrooms.

The projection technology for the whole arena is really nicely done. In particular, the boat that carries Peter the Great looked great. And then the map of the great wars of the 19th century rolls up over the waves and the ocean to reveal Petersburg. A great effect with a handful of people, very few props and construction and a giant projection system.

It’s a much softer, more pastel, less powerful and simpler ceremony than Beijing and London. Just people as dancers at a ball, or soldiers in formation (no guns) on a projected background, all out in the middle of a giant arena. During the ball scene, there were giant pillars sticking out of the ground while we all watched ballet and listened to Tchaikovsky that the German commentator her consistently misidentified as Stravinsky[1].

And here we are: the revolution, the Soviet. The red. And yet, still whimsical, in a way. The people are all just cogs in the machine. The focus narrows to a single group, highlighted again in an amazingly CGI way, with a glowing white light in the center, seemingly blowing the workers out away from it, all frozen in the moment.

I predict Putin lights the torch himself. Shirtless. He would totally win the Internets.

Alas, twas not to be.

But Karelin (Wikipedia) and Tretiak were good choices as well. I like how many cosmonauts they invited to the ceremony. Is that to rub US noses in the fact that Russia still has a space program?

Ceremony winding down. Over and out.

[1] He would finally be right during the torch-lighting ceremony.↩