Hoo-boy, no wonder this app has a two-out-of-five-star rating on the App Store. It’s absolutely terrible.

This is one of the first pages I saw: 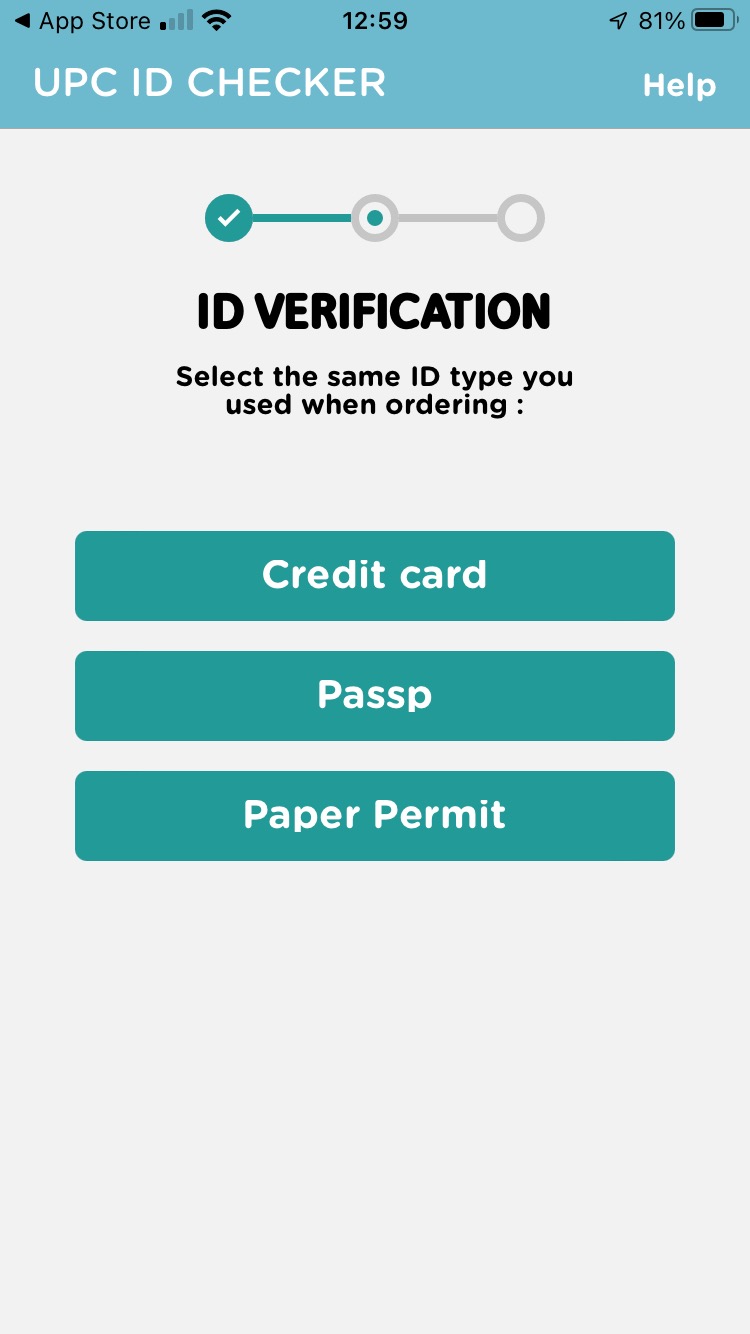 I had used my Swiss ID card as my proof of identity during the purchase. Now, I was supposed to actually send a photo of it to UPC so that they could verify it.[1] Unfortunately, I couldn’t see my option in this list. I was not encouraged that the second button was labeled “Passp”. I clicked that first, thinking that maybe the app just thought that all forms of national ID were a passport.

The picture is definitely a passport and the button text says “Ne”, which is awesome and totally encouraging for an app that’s supposed to scan my most sacred documents.

I soldiered on, but the app failed to recognize my ID card in this mode. It detected the serial numbers (it flashed a green square around them), but then rejected the scan. Obviously, it would have been more useful for it to say, “it looks like you’re scanning an ID, not a passport. Shall I just verify that instead?” but MY GOD THAT WOULD BE WITCHCRAFT.

Instead, it chirpily warned me that I had only 4 tries left before … what? Before it just never let me get a UPC Mobile account? Why is it limited to 5 tries? Would they then automatically send me the stuff by mail and charge me CHF40.- for the pleasure? All because their app doesn’t work? Lovely.

So I went back out and tried again.[2]

I honestly don’t even know what “Al…et” might even mean, but I clicked it anyway. This is, by the way, a piece of software developed by a company with dozens of millions of customers throughout Europe. They probably cleared billions in profit this year (maybe because they save so much on development and testing costs). The thought is mind-boggling. It’s honestly no wonder we as a species can’t complete any task larger than making a 5-second TikTok video.

Happily—and for no known reason—the page where I get to select which type of ID I’d like to scan looked better the second time around. 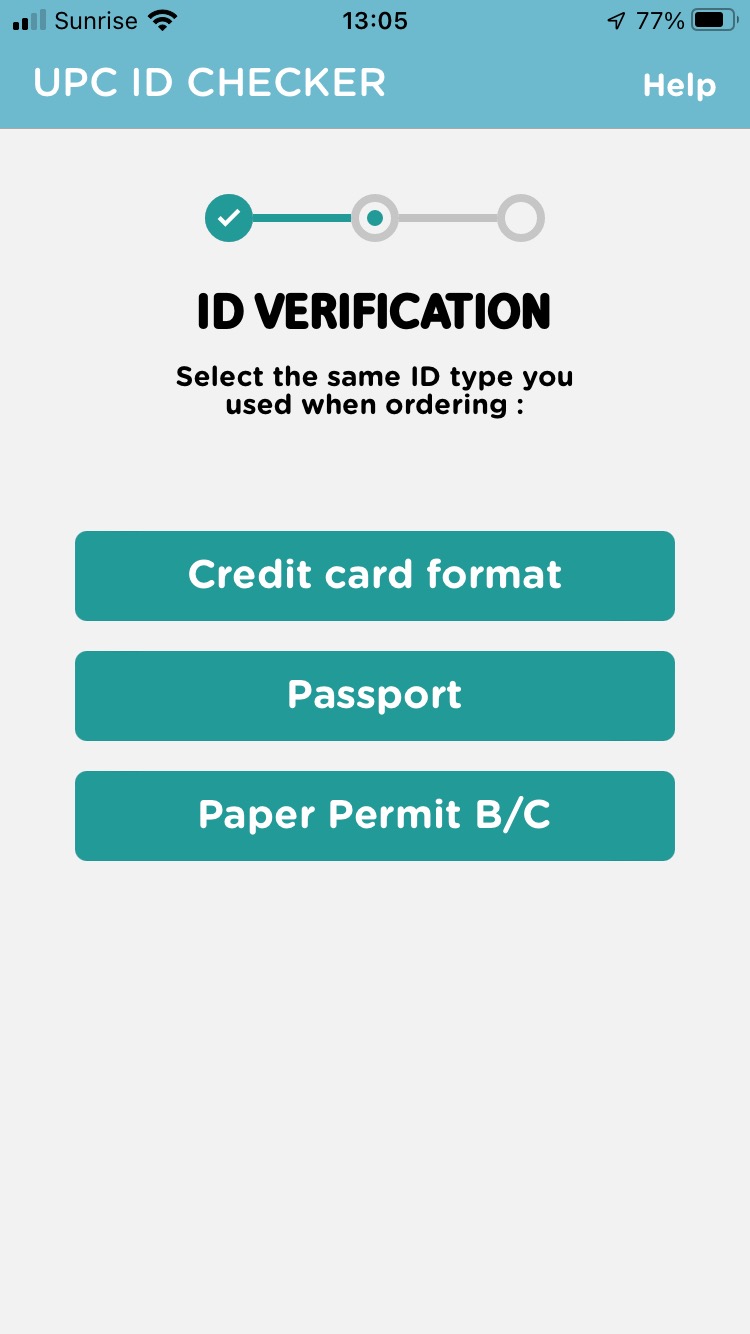 Cool, it’s nice to see that the cut-off text is still with us. I was worried that I’d discovered a whole part of the app that actually worked, even at a minimal level.[3]

I was finally able to scan my ID, but not before I got one of these: 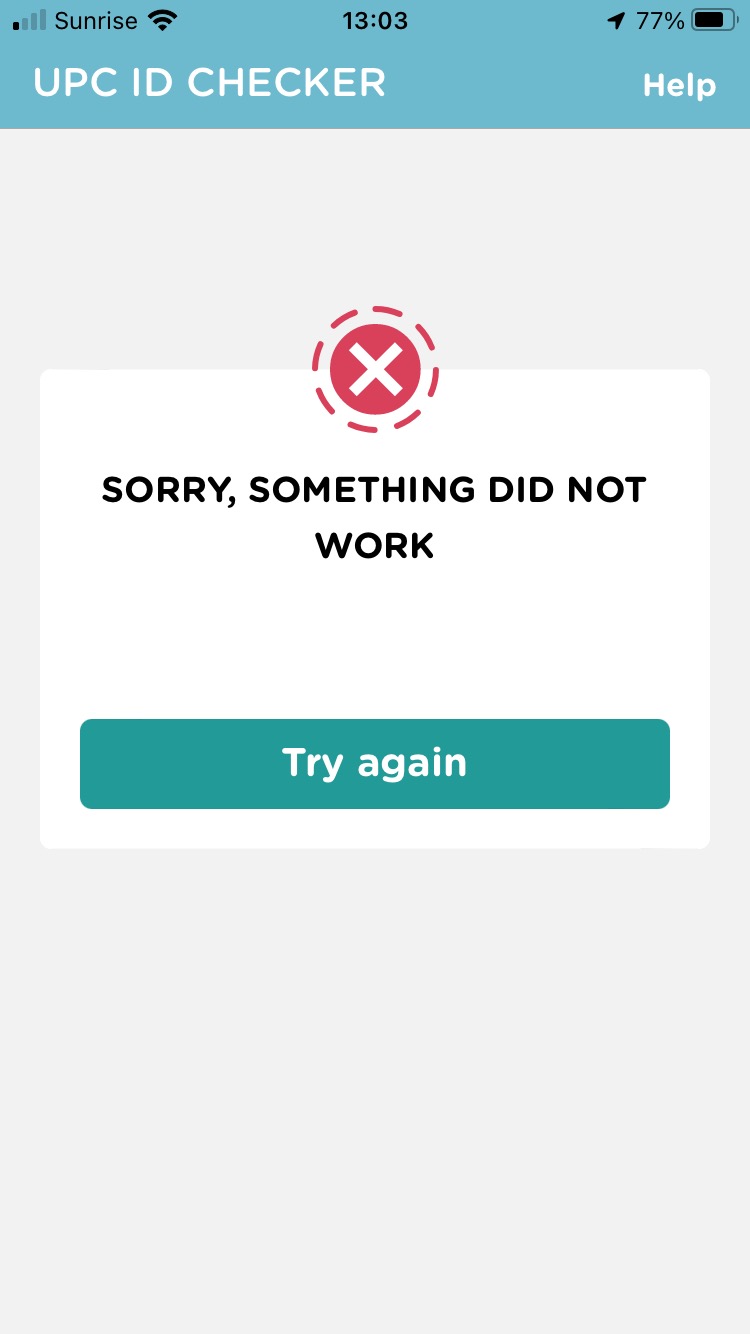 Sorry Something did not work

At this point, I was just rolling with it and restarted the whole app. Jackpot.

This was such an encouraging experience with a new mobile-phone provider.[4]

[1] Step one is to download a separate app just for verifying your ID for UPC.↩
[2] People who know me know that I only did this because my wife made me try again and told me to stop being such a baby and also to stop swearing so much and where did I think I was going to get a cell-phone contract from? Her patience should be rewarded with a beatification.↩
[3] I don’t think I’m being unnecessarily snarky here. I mean, what would you call getting four-letter labels not be cut off on giant, wide buttons? These are basics.↩
[4] I didn’t even get into how the next step was to take a selfie video of yourself so that the AI on the other end could verify the validity of your picture ID. That part actually worked (well, it verified me … but my ID picture doesn’t have a beard). Whatever, I passed the test. Isn’t it odd to anyone else how we just have to give so much biometric information just ot have a cell-phone data plan? Why did I persevere? See footnote [2] above.↩